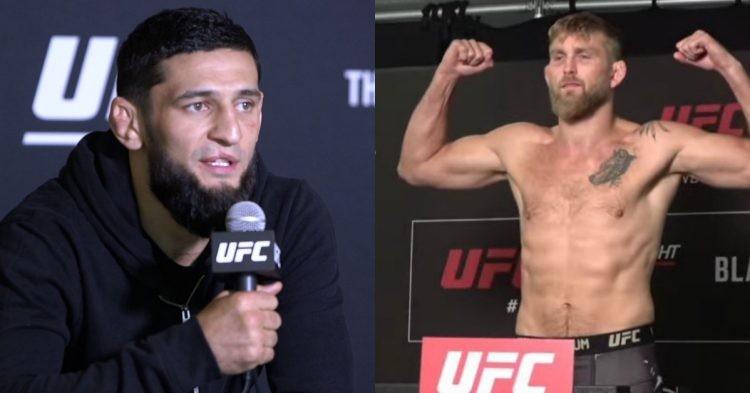 Khamzat Chimaev has a message Alexander Gustafsson. (Images via Twitter)

Alexander Gustafsson made his much-awaited return at the recently concluded UFC London. The former light heavyweight title contender came back to the division after trying out his hand in the heavyweight division. However, it was not a fruitful comeback as Alex lost to Nikita Krylov via TKO.

Nikita came out swinging from the very first second as he tried to get an early finish. However, even he would not have expected to drop Gustafsson as early as he did. In the opening seconds of the fight, Krylov caught him with a big hook that made Alex crumble. Although he tried to recover, Krylov’s power was too much and the ref stopped the bout at 1:07 minute of the first round.

Put the pressure on to get the job done early 😤@KrylovUFC is a PROBLEM!

After the bout, Khamzat Chimaev took to Instagram and posted a picture of him and Gustafsson together. He then wrote a beautiful message addressing The Mauler in Swedish.

“You are champ in our eyes forever, you are my role model brother, I became a fighter look up to you, thank you for everything you have done for us, so grateful to meet such a person like you in my life you are the best.” ( translation via Google)

How did Khamzat Chimaev and Alexander Gustafsson become friends?

These days it is hard to associate the word ‘poverty’ with Khamzat Chimaev. It is clear from his Instagram posts that he is living his life to the fullest. But that was not the case when he initially migrated from Chechnya to Sweden. Khamzat told his life story in detail ahead of his fight against Gilbert Burns. One person who helped him in his time of need was Alexander Gustafsson.

Chimaev spoke on how the Swed backed him financially when he needed it the most. With flood, clothes and whatever Khamzat needed, Alexander was always there to help him. They both train together at Allstar Gym in Stockholm. Hence they became friends very quickly.

“One time, we go up on run with Alex (Alexander Gustafsson). My shoes was not so good because, like, trash brother. He see my shoes after training he say, ‘We go somewhere’. (He) buy me shoes, like, training stuff. I appreciate it. And Reza also, he helped us. So, like, when we didn’t have food, he always come with the food, and give us money, help us. Never forget that, never.” (h/t via SportsKeeda)