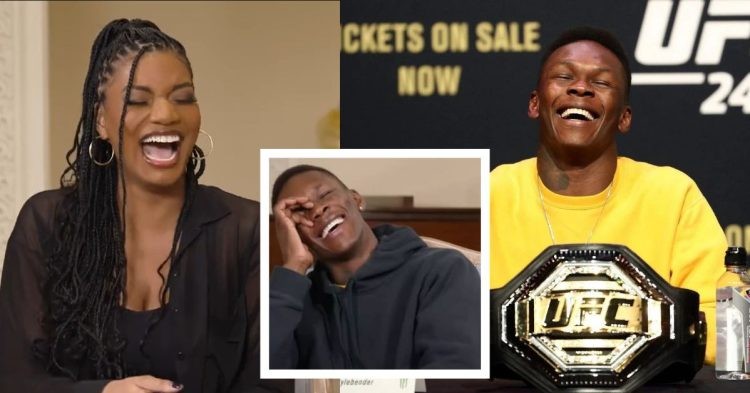 UFC Middleweight Champion Israel Adesanya is set to defend his title against his kickboxing rival Alex Pereira in the main event of UFC 281. Apart from the middleweight class, ‘The Last Stylebender’ has competed in multiple divisions, both in kickboxing and MMA.

But Adesanya never missed weight a single time in his fighting career. Ahead of his fight against Pereira at UFC 281, Adesanya shared an “exclusive” but embarrassing technique he used to make weight back in his kickboxing days.

In an interview with Taylor Rooks, Adesanya shared his craziest weight cut story. He was embarrassed and took long pauses before sharing this. After some pestering from Rooks, Adesanya said: “Back in kickboxing, back in the day when I was an amateur.

When I was really young and I did not have a fight dietitian, the guy who looks after us here with my meals and whatnot. I did not have him on deck, I wasn’t in the UFC.”

Blushing and embarrassed, Adesanya continued: “Ahhh, f**k man. How do I put this? I busted a n*t to make weight.”

One thing about this job….you never know what you’re going to hear lmao

Asked Israel Adesanya about the craziest thing he had to do to cut weight. We weren’t …expecting the response

Adesanya admitted that he mast****ted to make weight. Bursting out laughing, Rooks asked: “How much does that weigh?” To which Adesanya jokingly replied: “Do you really wanna know? …A few grams came off – hundred grams. And I made weight.”

This was not what Rooks was expecting. However, the middleweight champ has advised not to follow this “exclusive” technique. This is because he was younger back then and didn’t know what he was doing.

Which divisions has Israel Adesanya competed in?

Israel Adesanya is undefeated in the UFC’s middleweight division. He is at a point where he has almost cleared out the division. However, in an attempt to find more challenge, he moved up a weight class and fought Jan Blachowicz in the light heavyweight class at UFC 259.

However, Adesanya lost the bout via decision and faced his first defeat in his UFC career. This was not the first time Izzy has moved up a weight class, as he fought in multiple divisions back in his kickboxing days.

Apart from the middleweight class, ‘The Last Stylebender’ has fought in Cruiserweight and Heavyweight divisions in his professional kickboxing career. Adesanya amassed an overall 75-5 professional record and a spotless amateur record of 32-0 as a kickboxer.

According to Adesanya, he has plans to move up a weight class in the future. But for now, he will focus on defending his middleweight belt this weekend. Adesanya hopes to defeat the most dangerous striker he has ever faced, Alex Pereira at UFC 281 on 12th November.