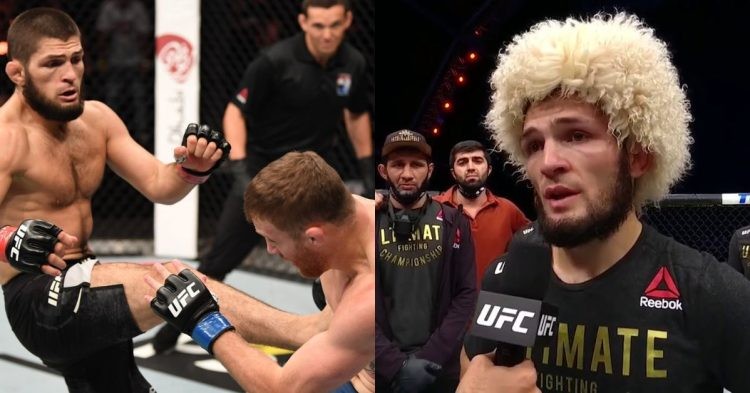 Khabib Nurmagomedov retired from UFC in 2020 after defending his title for the third and final time against Justin Gaethje at UFC 254. Thereafter the former UFC champion shifted his focus to coaching and his MMA organization EFC.

The Eagle is currently helping Islam Makhachev get ready for his upcoming lightweight title fight against Charles Oliveira at UFC 280. Amidst this training camp, Khabib sat down for an interview with UFC Russia’s interviewer.

While having a conversation, The Eagle discussed several topics from Islam’s title bout and potential opponents for the Russian lightweight in the future. During one of the segments, the interviewer asked Khabib whether MMA’s popularity has become stagnant and his impressions of the current superstars in the UFC.

Surprisingly, the former UFC champion agreed with this take and shared his thoughts as to why he feels that the combat sport is heading towards a decline.

“Maybe it’s because the flame inside of me went out. But I think there’s been a dip in MMA. That’s what I think. I can be wrong.”

Does MMA have the potential to reach new heights and surpass all the viewership records?

It is understandable why Khabib Nurmagomedov feels that MMA is in a declining phase as UFC which is one of the biggest combat sports organizations has not been able to cross $1 million in PPV buys since May 2021.

Despite big names like Israel Adesanya, Kamaru Usman and Nate Diaz headlining the last few PPVs, the UFC has failed to surpass its past viewership records. Low PPV buys are a big concern for the sport and consequently, there are big doubts as to whether MMA as a whole has the potential to become the biggest combat sport in the world.

But there are several young prospects like Paddy Pimblett, Bo Nickal, Khamzat Chimaev, and Sean O’Malley who can help the promotion and sport reach the pinnacle. Khamzat is already emerging into a big superstar and if he manages to perform like he usually does then he could bring in big numbers.

Meanwhile, the rest of the top fighters will need to maintain their form and rack up wins in order to gain more popularity. Apart from the top stars, Conor McGregor always manages to bring in big PPV numbers and if he finds his form back then we can expect the UFC to easily surpass its previous PPV buys record in the future.