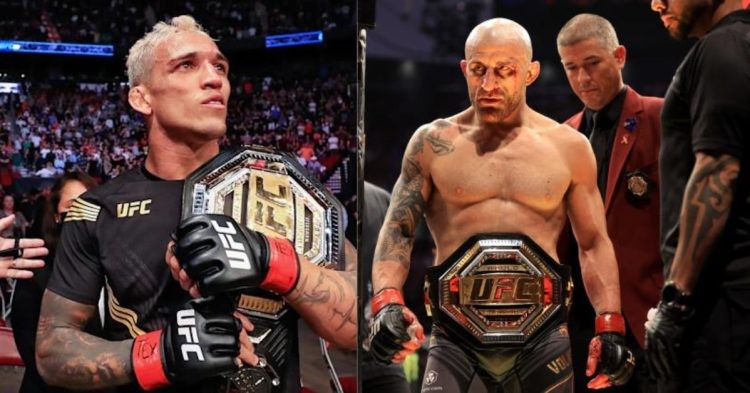 Charles Oliveira takes on Islam Makhachev in a certified barnbuster at UFC 280. Coming into the fight, Oliveira’s main aim will be to reclaim the title he lost due to missed weight at UFC 274.

With Islam set to fight Charles, there have also been murmurings regarding a backup for the fight, in case any party is not able to make it. Surprisingly, Alexander Volkanovski revealed that he will be the replacement should either fighter back out.

Speaking about a potential fight down the line against Volkanovski, Oliveira had a few interesting things to say. “With my timing, it’s to fight in Brazil afterward, regardless. If we’re gonna make this happen against Volkanovski, we’re going to have it two ways. We’re gonna fight in January (in Brazil), then we’re going to fight at the end of the year. So we’re gonna fight in two weight divisions.”

Charles further adds, speaking about the Australia card in February. “I can fight there in February, but for his belt.” On whether he’ll be able to make 145, Charles says, “Surely, I have a great team for this.”

Although his initial plan was to defend his title against Volkanovski in Brazil in January and then fight for the 145 lb belt in November, Charles reveals that he is open to fighting for the belt in Australia on the February card instead. At this point in time, there is no telling what the UFC will decide.

What is Charles Oliveira planning for after UFC 280?

For the most part, ‘Do Bronx’ is focusing on the task at hand which is Islam Makhachev at UFC 280. After him, Islam is the only other active fighter with a big win streak. Dubbed to be Khabib’s successor, the Dagestani fighter is arguably Charles’ biggest challenge at 155 lbs.

However, with Charles fighting what is likely to be a very difficult fight in October, he surely cannot pursue another fight just 3 months down the line. Not only is it too soon, but also a big risk, especially against someone with the skill and pedigree of Alexander Volkanovski.

Even though a fight in February seems more reasonable, many have expressed concern regarding Oliveira’s ability to make 145. Fans have pointed out that Oliveira missed weight six times during his stint at 145 and most recently in his fight against Gaethje. Will Charles fight Volk in February? Will it be for the 145 or the 155 strap? Leave your thoughts in the comments below.