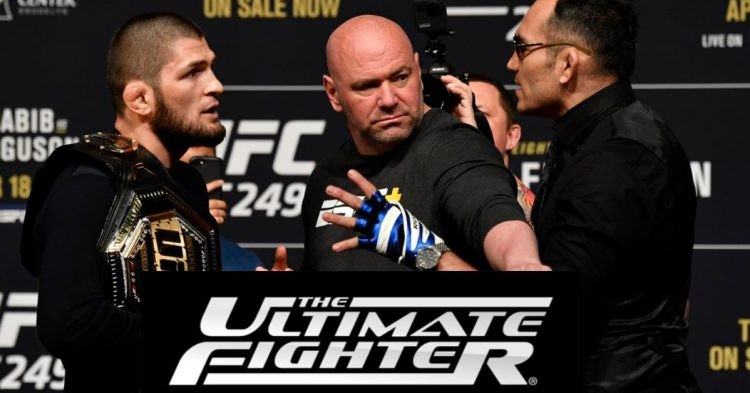 Khabib Nurmagomedov vs Tony Ferguson at TUF? (Images via Twitter)

It looks like Dana White still has hopes to see Khabib Nurmagomedov fighting Tony Ferguson. A number of weeks ago, former lightweight champ Khabib expressed his interest in coaching a season of The Ultimate Fighter (TUF). He chose Tony Ferguson to be the rival coach opposite him. But there was no official indication of it happening.

However, now it seems like the UFC President has been thinking about the prospect of accepting Khabib’s proposal. During a recent conversation with Robbie Fox on the Spinnin Backfist MMA Show, White spoke on the possibility of bringing The Eagle and Tony together.

But he did not seem encouraged by the idea of the two not fighting at the end of the show. But he certainly left the door open for Ferguson and Nurmagomedov to come face to face once more. He even joked about stirring the put between to two so that they come to blows and decide to settle their beef in the Octagon. White said,

“I will absolutely entertain that idea… Hopefully, they’ll get pissed off enough at each other that they actually want to fight and I can make them fight.”

The UFC President Dana White is the type of guy who will leave no stone unturned to get what he wants. Hence, if he sets his mind on making Khabib fight Tony, he will give his absolute best. However, Dana has already failed once in his pursuit of convincing Khabib to stay active. Late in 2020, he teased a big meeting between him and Khabib to decide the latter’s future.

It’s about to go down 👀 pic.twitter.com/mV8b1YLPGt

It almost seemed like he was going to make an offer to Khabib that the 33-year-old could not have refused. It was no secret that Dana wanted Conor McGregor to fight Khabib for the second time. Their first bout at UFC 229 sold 2.4 million PPVs. Hence it was a no brainer for Dana to try and convince Khabib.

But McGregor’s loss to Poirier at UFC 257 in early 2021 ruined the plans and Khabib ended up retiring and opening up his own promotion, Eagle FC. Hence, White will have an uphill battle in trying to make Khabib once again. However, His job this time is half done because Nurmagomedov himself is interested in coming back as a TUF coach.

One key piece to the puzzle is ‘El Cucuy,’ Tony Ferguson himself. Tony does not have the same aura around him as he did previously. Four back to back losses have done irreparable damage to his reputation. Hence, it is hard to see Khabib being enticed by the idea of a fight between them. So the last weapon for Dana White is to offer Khabib a lot of money.

As MMA fans know by now, Khabib is a man of principle. He walked away at the height of his powers because of a promise to his mother. So monetary gains will not be enough to persuade him into fighting again.

Hence it will be up to Tony Ferguson and Dana White to change Khabib’s mind. Khabib is a prideful man, so pushing the right buttons may just make Khabib re-consider his retirement.

Do you think Dana can talk Khabib into fighting Tony Ferguson after five failed attempts? Or will this be one of those rare seasons where the rival coaches don’t end up fighting? Let us know in the comments down below.