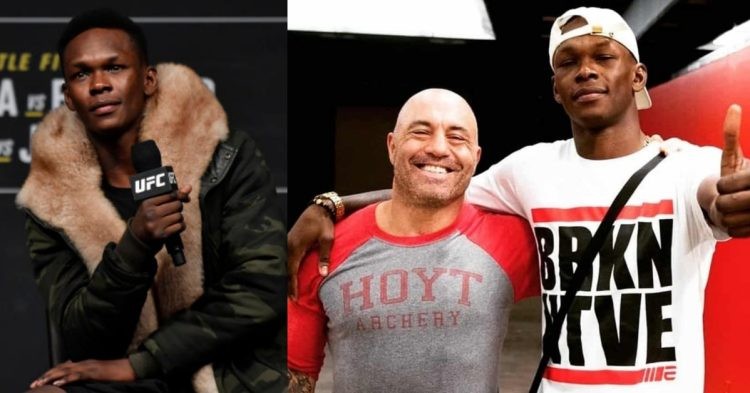 Joe Rogan, the legendary UFC commentator, will be back inside the commentary booth at UFC 281. After missing the previous PPV, fans are glad to hear that Rogan will call the much-anticipated middleweight title fight between Israel Adesanya and Alex Pereira.

The current champ, Israel Adesanya is also a big fan of Joe Rogan. Izzy appeared on Joe’s podcast, “The Joe Rogan Experience,” twice. His first appearance came on July 10th 2018. Izzy was coming off a dominant win over Brad Tavares and was looking to take the next step in his career. Appearing on the JRE podcast helped his cause as more fans took notice of him.

🎾💨
Came for the Marshall.
Stayed for the Rogan #goodboy 😍😍😍 pic.twitter.com/bD1C2fjYMf

The Last Stylebender appeared on the podcast for the second time in 2019, after violently knocking out Robert Whittaker to win the UFC middleweight belt. Izzy shares a good bond with Rogan and he stood up for the 55-year-old earlier in the year when Rogan found himself in a lot of trouble for some of his past comments. Rogan was recorded saying a racial slur multiple times throughout the years.

But, Rogan found a lot of vocal advocates from the MMA community and Israel Adesanya was one of the main voices. But why did Adesanya decide to support Rogan when it seemed like the entire world was against him? The 33-year-old finally reveals the reason.

Israel Adesanya did not want Joe Rogan to be cancelled

Israel Adesanya recently appeared on former NFL player Ryan Clark’s “The Pivot Podcast.” During their almost an hour-long interview, Clark asked why Adesanya jumped to defend Joe Rogan amid such a big controversy. In reply, Adesanya did not pull any punches and gave a very honest answer.

To an extent, Adesanya felt as if Joe was a victim of his own success. It was initially reported that Rogan’s move to Spotify earned him $100 million. But, as recent reports clarified, the deal was worth $200 million at the very least! Hence, it made him an easy target.

“First of all, I like to p*** people off. But secondly, I know Joe. I know Joe and that’s far from the truth. And I could see what was happening at the time. He signed this deal with Spotify, hunderd million dollars. He had this platform that he controlled. No executives, no head honcho telling who he can put on.”

Izzy thought the timing of the controversy was a tad bit convenient. At the height of the COVID-19 pandemic, Rogan invited a lot of guests with conflicting points of view. It led to a certain portion of society saying that the JRE podcast became a source of misinformation. But Adesanya did not agree with it. He could not sit idly as one of his friends was about to be ‘cancelled.’

“I can see through the bullsh*t. I was like, you guys, we’ve have seen this f***ing thing play out before. You try and ‘cancel’ somebody. So for me, I just felt like yeah, f**k them. I’m not gonna let people try and like you know, take down a guy that I know who’s far from it.”

As previously mentioned, Adesanya (UFC record 12-1, MMA record 23-1) will fight Alex Pereira (UFC record 3-0, MMA record 6-1) at UFC 281 main event in Madison Square Garden on November 12th. Alex has 2 kickboxing wins against Adesanya and has been quite good with his mind games with Izzy. He recently trolled Israel by posing alongside an Elsa impersonator.

Another video of Alex’s son mocking Izzy to his face also went viral. So the excitement for the contest is at a fever pitch and fans will be waiting with bated breath to witness this great match-up. Let us know your pick for the fight in the comments down below.