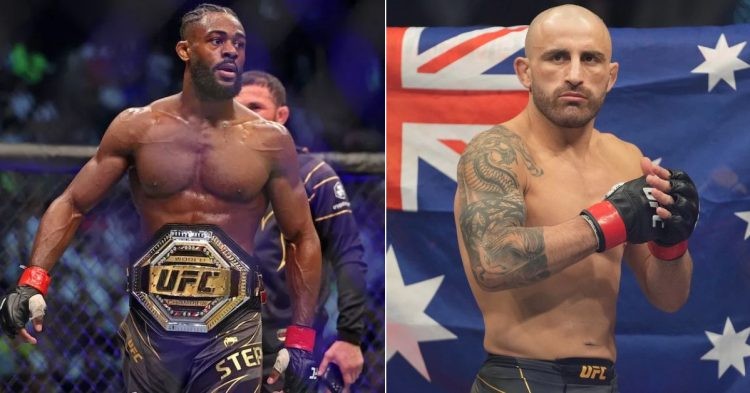 Aljamain Sterling reigns supreme as the UFC’s Bantamweight Champion. With two successful title defenses to his name, Sterling has etched his name in the history books. And now, he is looking at a possible move to the featherweight division and believes he is a bad match-up for Alexander Volkanovski.

“I would love that opportunity. That would be a great opportunity. I think stature-wise, it gives me a real realistic chance of winning. I cut a lot of weight, but in terms of the frame, he is not the tallest featherweight. He is short, combat, explosive, and smart, and I do think I got the wrestling pedigree that some of the other guys he fought might have lacked and they got him in trouble.” Sterling said in a conversation with ESPN.

It’s interesting to note, Volkanovski will be tested in all the areas that Sterling believes he can exploit as he takes on Islam Makhachev in 2023. It’s safe to say that the outcome of that fight will leave us with some idea with respect to how a potential fight between Volkanovski and Sterling goes down.

Sterling has previously stated that he wanted to fight sometime around June next year and has no plans on making a quick turnaround. Henry Cejudo has emerged as the next challenger to Sterling, however, the Bantamweight Champion feels Sean O’Malley will be his next fight.

I wonder if Henry is thinking about me…

“Suga Sean, sign the contract,” Sterling said. “There’s no contract though, but if there’s a guy I could pick, it’s Mr. Sugar. I think he is the biggest guy. H is the most active, he beat the #1 guy, the former Champion. So I don’t think how he can backtrack.” He further added.

As for Henry Cejudo, Aljamain Sterling believes that Triple C should fight another contender before the title shot. Earlier, UFC President Dana White had confirmed that the winner of Petr Yan vs Sean O’Malley would get the title shot. With O’Malley emerging victoriously, it’s hard not to see him get a title shot. Moreover, with Sterling nodding his head on the same, it shouldn’t be too hard for the UFC to book that fight.
Tags: Alexander VolkanovskiAljamain SterlingUFC
Previous Post