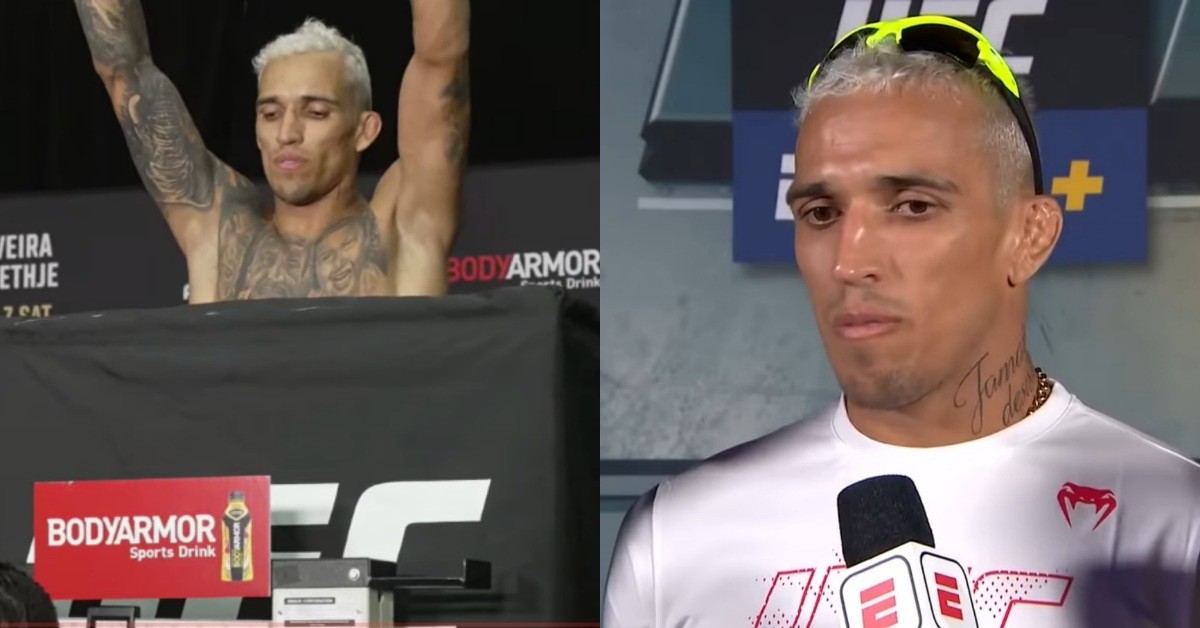 In a major shock, UFC Lightweight Champion Charles Oliveira failed to make weight during weigh-ins for UFC 274. After multiple attempts to make weight, Oliveira was ultimately 0.5lbs over the championship weight. It forced the UFC to vacate the belt and alter the rules for the contest.

The challenger, Justin Gaethje can still become the champion if he beats Do Bronx on Saturday. Gaethje weighed in at 155lbs, which was the official limit for the title bout. Oliveira on the other hand will still compete. He may win the fight, but can not attain the belt due to weight miss.

How did this happen? Following the drama, Charles Oliveira tried to explain his side of the story. In a backstage interview with ESPN, Oliveira revealed that he made the weight a day before the official weigh-ins. He explained that he had no food or water ahead of the weigh-ins. Hence, he can not pinpoint how his body weight increased overnight.

Carnelossi clarify the difference was .5, not 2 pounds. Dumont, on the other hand, told me 2lbs. https://t.co/uVcW8FUbfB

The Brazilian did offer an explanation about what may have happened. Some fighters complained that the scale was not showing accurate weight. Pointing that out, Oliveira said,

“I went to bed, wake up the following day, (on) the UFC scale its a pound over. I’m 1(lbs) over and I don’t understand what happened. We work, we’re professionals, I did not do anything wrong. To me, it was it didn’t make sense. Other fighters started talking about it as well. They were talking about exactly those 200-300 grams (0.5lbs) and it was exactly the difference in the scale of the UFC.”

However, it is not taking anything away from his passion and determination to win the contest on Saturday. Charles Oliveira still believes that he is the true champion regardless of the belt. Throughout the interview he kept repeating the phrase, “The champion has a name, his name is Charles Oliveira.”

What is next for Charles Oliveira?

Charles Oliveira had a history of missing weight during his run as a featherweight. He has been on the wrong side of the scale 4 times previously. But in recent years, it seemed like Oliveira has found a way to make the weight smoothly. Hence, it is shocking to see him reverting back to his old habits.

But the fans also have to take his words under consideration as well. Just hours before the weigh-ins, Oliveira put out a tweet that indicated he is under the champion weight limit. There were other complaints about the scale as well. So there remains a possibility that something went wrong with the scale which led to the whole fiasco.

As for his immediate future, Charles Oliveira will fight Justin Gaethje at UFC 274 as scheduled. If he wins the bout, it will certainly increase his stake in claiming a spot in the championship contest next. It is unfortunate for the fans that the lustre of the fight has been tainted by this incident. But they still may get a banger of a fight this Saturday.

While Gaethje will be motivated to finally win the Undisputed Championship, Oliveira will be desperate to prove the doubters wrong and retain his elite status.