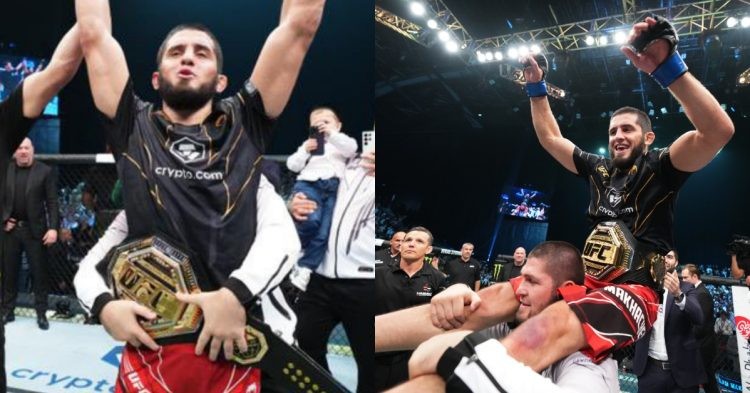 In the main event of the PPV, Khabib’s cousin, Islam Makhachev grabbed the vacant lightweight championship and kept the Dagestani legacy going. He outclassed the former champ Charles Oliveira both on the feet and on the ground. He then proceeded to submit the BJJ maestro in the second round.

But, something rare happened afterwards in the post-fight ceremony, that fans are not used to seeing. Usually, after the championship fights, UFC President Dana White wraps the belt around the winner. However, it was the former UFC champ and lightweight GOAT Khabib Nurmagomedov, who presented the belt to Islam Makhachev.

It was an extremely emotional moment as The Eagle picked up Islam on his shoulder and ran around the Octagon in joy. But how did the moment come to be? While speaking to ESPN, Nurmagomedov revealed it was his idea to put the belt on Islam. But he still needed Dana White’s approval and White was more than happy to give it to him.

“I told Dana [white], ‘I have to give him this belt, because I didn’t lose the belt, because I know I am the champion until this day, before Islam [Makhachev] became champion. They said, ‘no problem. Take it. This is yours. This is Dagestani belt.’ they gave it to me, I put it on.” (h/t via MMA Fighting)

Khabib Nurmagomedov retired in 2019, after beating Justin Gaethje at UFC 254. At the time of his retirement, Nurmagomedov had a record of 29-0 and was considered Dagestan’s brightest star. He never lost the belt as he walked away from the sport with an unbeaten record. So allowing Khabib to present the belt to Islam, was a nice touch as it was the perfect ‘passing-the-torch’ moment.

Islam Makhachev credited Khabib Nurmagomedov for his win at UFC 280

UFC 280 was an entertaining event overall. But the headlining fight was somewhat anti-climatic. However, that was mostly because Islam Makhachev was too good for Charles Oliveira. In the biggest fight of his life, Makhachev stepped up and got the job done in the calmest way possible.

In the post-fight interview, Makhachev gave all the credit to Khabib Nurmagomedov and his late father Abdulmanap Nurmagomedov. Islam also put the belt on Khabib’s shoulder as a sign of respect.

“And I just wanna say DC, this my belt for my coach Abdulmanap Nurmagomedov. Many years ago, he told me, ‘Just training hard and you are gonna be champion,’ and I wanna give this belt (to Khabib Nurmagomedov). Him and his father make me, I know.”

Islam Makhachev kept Abdulmanap’s legacy alive, in the UFC, in the most beautiful way possible. This is just the beginning of Islam’s chapter. But he may already have his next opponent lined up, as coach Khabib stated that Islam wants to finish Alexander Volkanovski in his home country Australia. Despite the height difference, it promises to be an exciting fight for the fans to witness sometime in the near future.