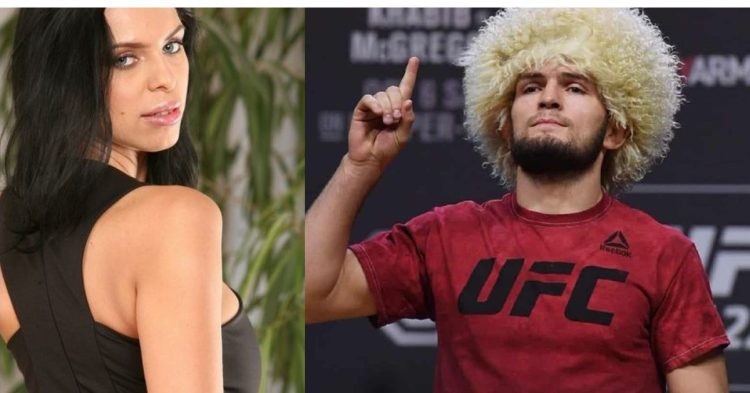 A few years ago, adult film star Kira Queen took the MMA community by storm by accusing Khabib Nurmagomedov. She revealed that Khabib offered a free Mercedes to anyone who would have her murdered.

This could have been a publicity stunt or a mere attempt of getting the spotlight. However, this did not turn out well for Kira as she had to face the backlash from the Khabib fans. Following the backlash, Queen clarified her statement and went to Instagram to set the record straight.

The shocking statement was made by Kira shortly after Khabib announced his retirement after his last fight in the UFC against Justin Gathje. Many Khabib fans did not like this and immediately thrashed Kira for making up a story to tarnish the name and legacy of ‘The Eagle’.

Queen’s initial statements implied that Khabib Nurmagomedov put out a contract to have her killed. Later, she cleared up the confusion and stated: “an account using Khabib’s name and image offered a financial reward for this crime. I didn’t say it was him. I didn’t even mean it.”

Man really spent 4 days trying to “expose ” khabib . He should actually spend more time in finding his Dagestani father who left him at a very young age https://t.co/lg2lhA4nD4 pic.twitter.com/tO3HQYXKhl

Kira clarified that Khabib wasn’t directly involved in any criminal activity against her. On the other hand, Khabib did not mention her or this incident after the accusation. While this could be a big misunderstanding, many Khabib fans had stated Kira just took Khabib’s name to grab attention.

Who Is Kira Queen and Why Did She Accuse Khabib Nurmagomedov of Putting Out a Contract on Murdering Her?

Khabib Nurmagomedov was in the news when this story went viral that he allegedly put out a contract and offered a Mercedes to anyone who would have Kira murdered.

For those who have no idea who Kira is, she is a Russian adult film actress and model. She was born in Russia and started her career in the AV industry in 2012 at the age of 26 and did her first shoot with the film studio ’21 S. Network’.

After this, she also worked with other film studios as an actress and these film studios mainly include Pulse Distribution, Sunset Media, and Harmony Films.

Queen appeared in a podcast and stated that two people started following her in Budapest recently, with one keeping an eye on her in the University, while the other saw her in a coffee shop. She claimed when she left the coffee shop, the second guy followed her outside and attacked her.

“When I got out, he attacked me with a knife,” she added. Luckily, Kira Queen didn’t receive any injuries as the knife only cut her jacket. Because of the attack, Kira Queen had to escape Budapest and stop working.

Later, she saw the “other guy” on social media, asking Ramzan Kadyrov, the head of the Chechen Republic, to give him a gun, so that he could find Queen and kill her. After the incident, Kira Queen went to the police station and filed a complaint against the guy who threatened her.

The adult film star claims that she’s scared as the accused is in prison for only five years and can try to kill her again after getting out. However, after that podcast, Kira made a video and clarified that she never said that Khabib Nurmagomedov had put a hit out on her.