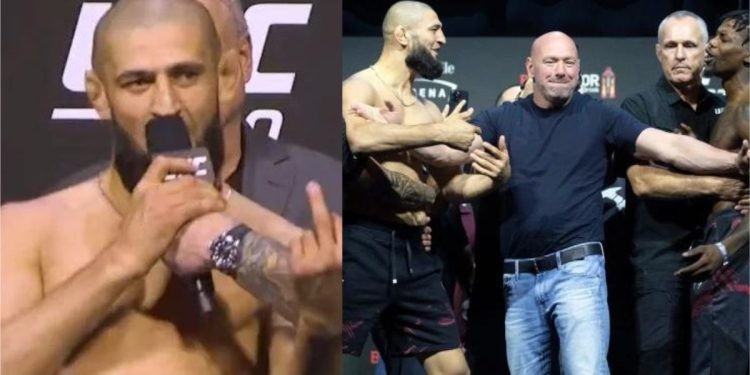 Khamzat Chimaev has received endless boos and hatred from the fight fans following his weight missing incident before UFC 279 that started the major shuffle in the main card.

However, the Chechen fighter isn’t bothered much by the hate he has received from the fans, and right before his bout against Kevin Holland he flipped off the crowd and told them to “Fu** Off!”

At the UFC 279 post-fight press conference, Chimaev was asked whether the hate and boos from fans made him mad or sad. He replied by saying that he didn’t care what the fans thought of him at all.

“The people don’t like me? One day they are with me, one day they’re not with me. I am a real guy, so I like the people that are real. Not the fake people that go one way and then goes the other,” He added.

Recently, Chimaev has gotten into heated trash-talks an altercation with some of the UFC’s biggest fan favorites, Nate Diaz and Paulo Costa. Later he also got into a verbal and physical exchange with Kevin Holland that forced Dana White to cancel the UFC 279 press conference.

This could be the reason why the fans were booing Chimaev from the moment he walked out and even throughout the entire match with Holland.

Khamzat Chimaev was very charged up at the face-off against Kevin Holland. Following all the backstage incidents and then the weight missing fiasco, the whole main card for UFC 279 was shuffled. As a result, the fans were not happy with Chimaev, so when he turned up he was met with endless boos.

Before the fight, Holland labeled Chimaev as a ‘fake gangster’ following an altercation. Recently, Chimaev also had a verbal exchange with Paulo Costa at the UFC Performance Institute.

Due to the pressure and the build-up, Chimaev snapped at the face-off and tried to intimidate Holland, who continued to bash him for pretending to be a gangster in front of the cameras.

When UFC commentator Joe Rogan asked him the reason why he missed weight by that much, he yelled at the booing crowd and gave the fingers, saying:

However, Chimaev still got another dominant win where he won without taking a single hit. As for his future, we might see him fighting Colby Covington next time he fights.