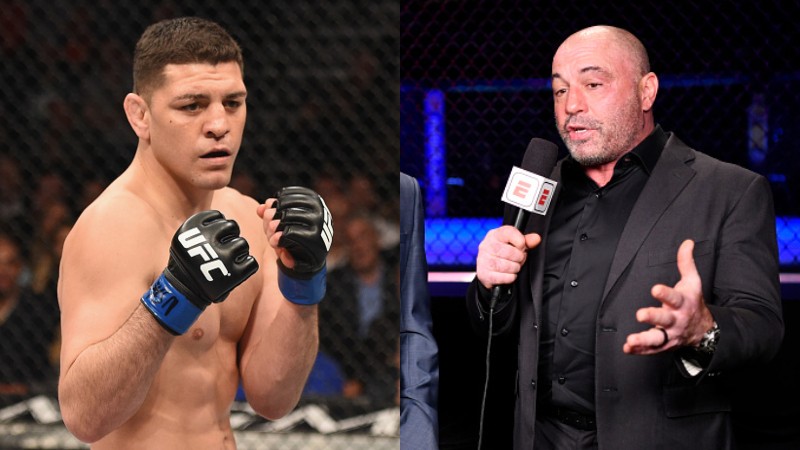 UFC’s decorated commentator Joe Rogan has given his thoughts on how Nick Diaz performed in his return to the octagon at UFC 266.

Joe Rogan has been covering UFC pay-per-view events alongside Jon Anik and Daniel Cormier for a while now. Although Rogan was not present at UFC 266 due to Rogan’s annual hunting trip.

The 54-year-old UFC color commentator while talking with comedian Bert Kreischer on an episode of the Joe Rogan Experience, said he was impressed with the way Nick Diaz performed against Robbie Lawler at UFC 266.

However, Rogan believes that being away from the octagon for more than six years may have likely played a part in the Stockton native’s defeat against Lawler.

“He didn’t do that bad for a guy that was out six years. Robbie Lawler was pressuring him and he was putting it on him and he was definitely getting the better of the exchanges, but it’s not like Nick Diaz didn’t have his moments. he definitely did.”

Rogan said that although he was impressed with how the elder Diaz brother looked, he still thinks that Nick could have performed better if he had been given more time to prepare.

Rogan said, “I don’t think you can just jump back in that easy after six years out of the sport. I think you probably need more time to prepare. I don’t know how much time he had to prepare and why they agreed to do a fight on short notice.”

Joe Rogan always had high regards for both the Diaz Brothers. Rogan has also mentioned in his podcast about how Nick Diaz has “changed the game” of MMA in terms of Diaz’s elite cardio.

He had also called the first bout between Diaz and Lawler 17 years ago at UFC 47. Rogan has witnessed a young Nick Diaz flourish as one of the most popular fighters on the UFC roster.