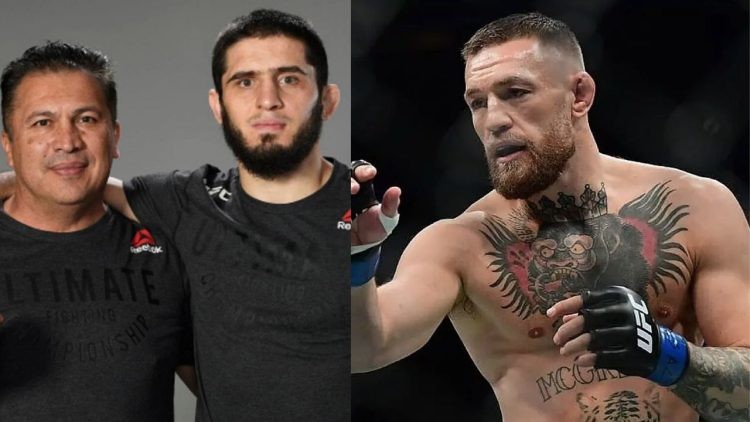 Islam Makhachev is at the cusp of greatness as he prepares for Charles Oliveira at UFC 280. Fighting for the vacant lightweight title, Islam believes he has what it takes to replicate the successes of Khabib.

With a dominant run in the division, Makhachev feels ready and up to the task of claiming the title. However, if he does become the new champion, who will his first challenger be?

Speaking to Submission Radio, Islam’s coach had a few things to say on the matter, specifically should a certain Conor McGregor come calling. “I don’t like Conor. So, I don’t care for him and the reason why I don’t care for him is, he made those comments regarding the COVID situation, and uh…any man that makes comments like that, I’m sorry, you’re not gonna get my appreciation for you because the whole world suffered. And whether you were joking, whether you’re not, you made those comments and to me… I just have zero respect for that… for anybody that would say what he did.”

Despite his personal disliking for the Irishman, coach Javier Mendez believes that Islam would take a chance on Conor. After all, he gets the chance to beat his mentor’s biggest hater and make a solid payday at the same time,  it’s almost a no-brainer.

According to coach Javier, he would rather see Islam take on Alexander Volkanovski. As such, he has a different level of respect for the Australian fighter. “He’s a class act, he comes from a very reputable gym that’s got, class coaches… I respect them very, very high. Very high opinion of those guys.”

What’s Next For Islam Makhachev?

For the most part, Islam and his camp are predicting an easy night out for the Dagestani. Even Khabib is under the impression that his protege is a level above former champ Charles Oliveira. Just to clarify, he is indeed talking about the same Oliveira that finished Michael Chandler, Dustin Poirier, and Justin Gaethje.

Even if he does not believe it, Oliveira will be Islam’s most difficult challenge yet. As such, he will have to be the best version of himself, far better than anything he’s shown us yet. In the event he does manage to snag the title, there is a whole list of hungry challengers that will want a piece of the pie.

We need to remember that Islam is yet to fight a Top 5 lightweight, meaning he will have the likes of Poirier, Gaethje, Chandler and Dariush breathing down his neck.  Do you think Islam takes the title? If so, who will his first challenger be? Leave us your thoughts in the comments below.