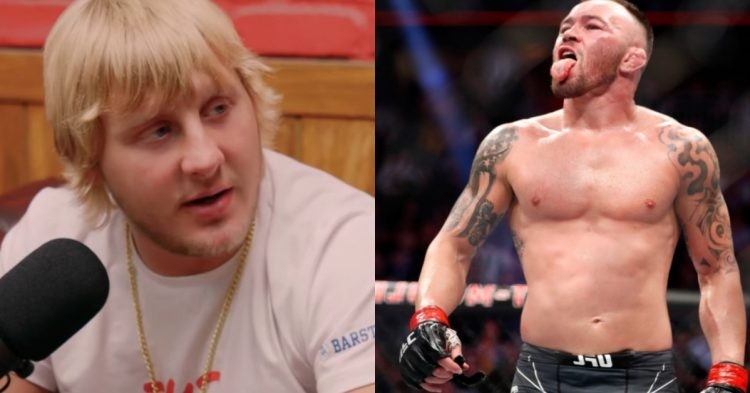 Paddy Pimblett is one of the most talked-about fighters in the UFC right now. Although he is yet to fight any credible challenge, Pimblett has won the fans over with his boyish charm and passionate speeches on the mic. But there are fans who wonder whether it is genuine or not.

The arrival of Conor McGregor left a lasting impact on modern MMA fighters. From wearing shades indoors to rocking a suit, McGregor revolutionized the way a fighter presents himself. One fighter who has modelled his appearance after that is Colby Covington. The former interim welterweight champion has become a very outspoken fighter lately.

But, unlike Conor, Colby’s demeanour does not come off as an authentic one. Not only is he overly loud, his political stance to his ‘supposed’ worldview, everything seems like it has been rehearsed previously. His gimmick seems like it is straight out of pro wrestling and Paddy Pimblett called it out during his recent appearance on Mike Tyson‘s Hotboxin’ podcast.

Mental health issues for men have been stigmatized over the years. Seeing a man shed tears comes with a lot of unwanted bullying. However, Paddy Pimblett is here to change that perception. Mental health is a very important aspect of a human’s well-being. After his fight against Jordan Leavitt at UFC London, The Baddy urged men to seek help if they are going through distress.

He was visibly shaken during the post-fight interview and it was a nice change of pace. Instead of showing his macho side, Paddy put his ego aside and paid a heartfelt tribute to one of his friends who died by suicide prior to his fight. Hence, it shows nothing that Paddy says or how he behaves, is an act.

But the same can not be said about Colby Covington. Because of his controversial takes, Colby has become a very polarising figure in the UFC. He had some horrible things to say about UFC welterweight legend Matt Hughes who suffered a traumatic brain injury as his vehicle was hit by a train. Colby mocked the legend after beating Robbie Lawler.

He also downplayed the severity of Covid-19 during the pandemic which caused the entire world to go on lockdown. Incidents like these have made Colby a very unpopular fighter amongst his peers. However, the rumours have it that Colby is actually a nice guy when the cameras are not rolling. He even admitted so himself.

What are your thoughts on the matter? Do you think Paddy Pimblett’s dislike of Colby Covington’s gimmick is warranted? Or do you enjoy Colby’s outrageous antics? Let us know in the comments down below.