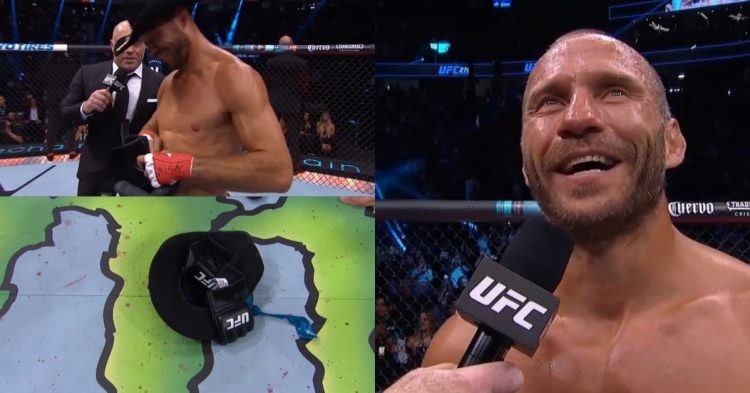 Jim Miller vs Donald Cerrone just took place at UFC 276. The rematch that was 8 years in the making, took place in the prelims of the international fight week card. Their previous bout in 2014 ended in the 2nd round as Cowboy knocked Miller out with his trademark head kick.

But ahead of the rematch, Donald Cerrone was under a lot of pressure. In the longest stretch of a winless period of his career, Cowboy had gone without a single victory in over 3 years. His last win was against Al Iaquinta in 2019. But then he found himself matched up against the elite of the lightweight division. After successive bouts against Tony Ferguson, Justin Gaethje and Conor McGregor, Cerrone was never the same.

The story of Jim Miller was exactly the opposite heading into the contest in Vegas. Since 2019, Miller had made the walk to the Octagon 8 times and he found himself on the winning side 5 times. In his last 2 bouts, Jim defeated Erick Gonzalez and Nikolas Motta via stoppage. So how did Miller fare against a weathered Cerrone? Let’s find out.

Jim Miller, who had a significant height disadvantage, looked much smaller in the Octagon against Donald Cerrone, especially at welterweight. But Miller held his own in the early minutes of round 1 as he landed a few leg kicks to keep Cerrone at bay. But Cowboy also responded with kicks of his own.

An action packed round 1 comes to a close 👀

With just over 2 minutes to go in the round, the 39-year-old slipped which allowed Miller to land in Cerrone’s guard. It resulted in some great grappling exchanges that saw both Jim and Donald try multiple submission holds. At the end of the round, Cerrone had a heel hook locked in. But, he was unable to finish it as the time ran out.

But it was Miller who got his revenge as he finished Cerrone in the second round via guillotine. As both of them tried to land a head kick at the same time, Cowboy slipped and Miller took advantage of that and jumped in to lock in a guillotine and Cerrone had no choice but to tap. With the win, Jim Miller is now the fighter with the most number of wins in the UFC.

The last ride of an iconic career. Thank you @CowboyCerrone 👏🤠 pic.twitter.com/LEF6Lnea6i

After the bout, Donald took off his gloves and his cowboy hat and kept it on the mat as a gesture of his retirement. Talking about his retirement, Donald Cerrone said,

Donald Cerrone lays down his gloves and hat in the Octagon at #UFC276 pic.twitter.com/1g7K6GX8OG

After 11 years and 36 fights in the UFC, Donald Cerrone finally retires with a record of 55 fights with 36 wins and 17 losses.