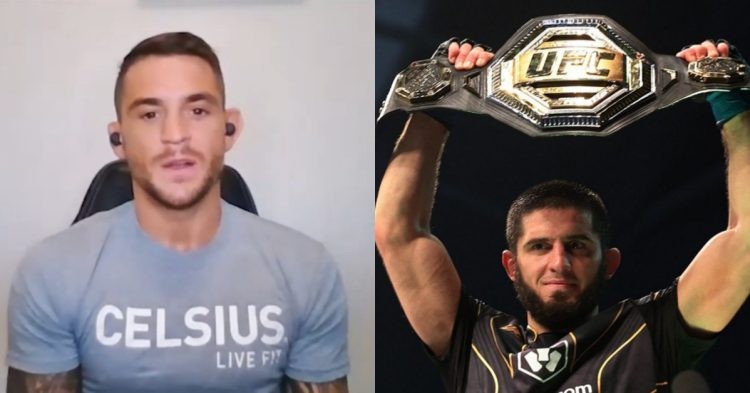 Former UFC interim lightweight champ, Dustin Poirier will make his much-anticipated return to the Octagon on November 12th. He will fight the former title contender Michael Chandler on the main card of UFC 281. So what is next for The Diamond if he beats Michael at the upcoming PPV?

Dustin Poirier has a UFC record of 20-6-1. He has two wins each over Max Holloway and Conor McGregor. But not only that, he beat the former interim champ Justin Gaethje, and undisputed champions, Eddie Alvarez and Anthony Pettis. It makes his resume unlike any other in the UFC. On top of that, a majority of those fights were extremely entertaining to watch.

So, can Dustin Poirier get back in the title picture if he beats Chandler at UFC 281? In a recent interview with Yahoo! Sports, Dustin clarified his lack of callouts for the new champion Islam Makhachev. According to the 33-year-old, he can rely on his resume to get the title shot, without having to call for it on social media platforms.

“I mean, I feel like my track record and work speaks for itself. I don’t need to get on a platform and beg for a title shot. I’m gonna go out there, I’m gonna fight next weekend and let the cards fall where they may.”

At UFC 280, Islam Makhachev grabbed the undisputed lightweight belt against Charles Oliveira. While fans were eager to see the battle between two grapplers, it was Makhachev’s striking that made the difference. Islam knocked down Do Bronx with a stiff shot and proceeded to finish him on the ground with a submission. Much like many other fans, Dustin was also very impressed with the performance.

“It’s huge! In this day and age in mixed martial arts, you can’t be a fighter who had one thing. You’ve got to be able to do it all. You have to be a mixed martial artist. And he showed that. He went out there and hurt Charles, and put him away at his own game. That’s the highest level.”

At the previous PPV, Makhachev showed the evolution of his skillset. Fans can no longer label him as just a wrestler. He is much more than that now. Islam’s striking is heading towards the right direction and his power is certainly a sign of worry for his opponents. Oliveira could not even bruise Makhachev during their fight and that is something that Poirier certainly appreciated.

So, now the question becomes, can Dustin get a title shot on the back of a win over Michael Chandler? Chandler is coming off an impressive KO win over Tony Ferguson. He is also the 5th ranked fighter in the division. So a win over a Top 5 opponent should secure Dustin a title shot. If he indeed ends up getting the chance, it will be his 3rd opportunity after UFC 242 and UFC 269.

But Poirier will have to wait a bit longer for his 3rd crack at the title. Islam Makhachev is currently aiming for a fight against the 145lbs champ Alexander Volkanovski. The featherweight champ served as a backup fighter for UFC 280. After beating Oliveira, Makhachev called out Alex for the no. 1 position in the P4P slot.