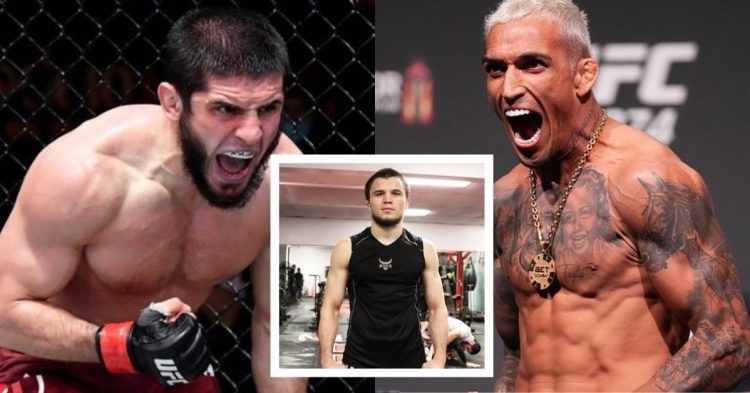 Islam Makhachev will face the former champion Charles Oliveira in the main event of UFC 280 at the Etihad Arena in Abu Dhabi, on October 22nd. We are now less than two weeks away from the event and Makhachev is in his final phase of training for the biggest fight of his career.

In the 3rd episode of ‘Prelude to UFC 280’, Makhachev along with his team can be seen perfecting their techniques ahead of UFC 280. Apart from Makhachev, this episode featured fighters like Belal Muhammad, Abubakar Nurmagomedov, and others.

Javier Mendez, Khabib Nurmagomedov, and other coaches were also there guiding the fighters for their upcoming fights. The former champion’s cousin and UFC bantamweight fighter, Umar Nurmagomedov was also there. He said: “I’m happy I’m gonna leave because I don’t wanna stay here.”

The bantamweight prospect stated that he and some of the other teammates won’t be there at the arena to watch Makhachev’s title fight. Umar also added:

“This is a very hard time last week when everybody gonna fight like when you are watching and you are sitting in the stadium and indoors is different. Watching in TV is easy. More easy than going to a stadium to watch.”

Islam Makhachev vs. Charles Oliveira: Who will be the UFC lightweight champion?

Islam Makhachev will face the toughest opponent in his career when he takes on Charles Oliveira at UFC 280. The Brazilian is the former lightweight champion and got stripped of his title in his last fight against Justin Gaethje for missing weight.

Surprisingly, Oliveira will be the underdog in the fight against the Russian but he should not be underestimated. ‘do Bronx’ is on a straight 11-fight-win run and coming off impressive stoppage victories against Justin Gaethje, Dustin Poirier, and Michael Chandler in his most recent world title outings.

Oliveira has shown his grit and skills inside the octagon while facing the toughest fighters of the lightweight division. Moreover, having stripped of the belt Charles will be coming with the intention to reclaim the belt.

Both Oliveira and Makhachev are elite grapplers. While the Russian is known for his dominant wrestling, Oliveira has the most submission win in the UFC. However, Makhachev will also face a standout striker in Oliveira, who has experience with some of the best strikers. Throughout the years, Charles has also perfected his standup game and often uses his Thai-styled striking in his fights.

However, Oliveira will have to be careful in this fight as he will face a fighter whose wrestling is only second to the former undefeated champion, Khabib Nurmagomedov. Meanwhile, Makhachev will be looking for a way to take the fight to the ground but he must be aware of his opponent’s submission and phenomenal striking skills.