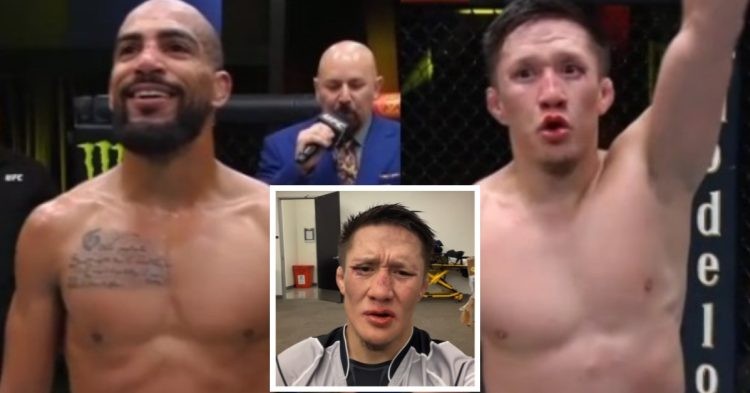 UFC Vegas 65 is officially on the books. The event had some bizarre incidents throughout the night. First, the main event between Derrick Lewis and Sergey Spivak was canceled for medical reasons. Then Miles Jones made dropped a bombshell and revealed, UFC has suspended James Krause from the event. Also during the event, Zhalgas Zhumagulov announced his retirement!

Zhalgas Zhumagulov fought Charles Johnson on the main card of the recently concluded event. Unfortunately for Zhalgas, Johnson won the bout via split decision after 3-rounds of back-and-forth scrap. However, Zhalgas was devastated by the decision and it was evident from his immediate reaction after the result. He disagreed with the decision and thought he won the contest.

On the ground, Zhalgas controlled the action for 1:03 minutes and Johnson controlled for 57 seconds. But it was Zhalgas who secured the only takedown of the bout. Although the stats are very close, they do favor the 34-year-old. But two judges saw the fight differently as they scored the bout 29-28 for the winner. The other judge had it 28-29 for the loser.

Zhalgas Zhumagulov reveals why he retired after UFC Vegas 65

Zhalgas Zhumagulov has had a disastrous run in the UFC so far. He joined the promotion in 2020 on the back of a record of 13-3. At the time of joining the promotion, he was the Fight Nights Global flyweight champ. But his form did not translate in the UFC as he lost both of his first two contests in the UFC via unanimous decision. Zhumagulov‘s only UFC win came against Jerome Rivera at UFC 264, via submission.

However, he lost 3 successive bouts after that, including the one against Charles Johnson at UFC Vegas 65. Zhalgas Zhumagulov currently holds a UFC record of 1-5. But, only one of those five losses came via stoppage. Hence, he feels as if he is treated unfairly by the judges. After the bout, he addressed the fans from the locker room and announced his retirement from the sport.

“Everyone saw the fight, what can I say? There is nothing to say. This was my last fight. Thanks to everyone who cheered for me. I don’t want to fight anymore. For some time I fight – the judges do not give me back. You plow, plow, do all the reasons – and just like that. Now I’m not saying this out of emotion – as it is. Thank you to everyone who was rooting for me.” (h/t via Sherdog)

Zhumagulov was visibly upset about the loss and perhaps took the step to retire out of frustration. Hence, it will be interesting to see if he backtracks his comments in the coming days. But, if he does stick by his decision, Zhalgas Zhumagulov finishes his career with a record of 14-8.