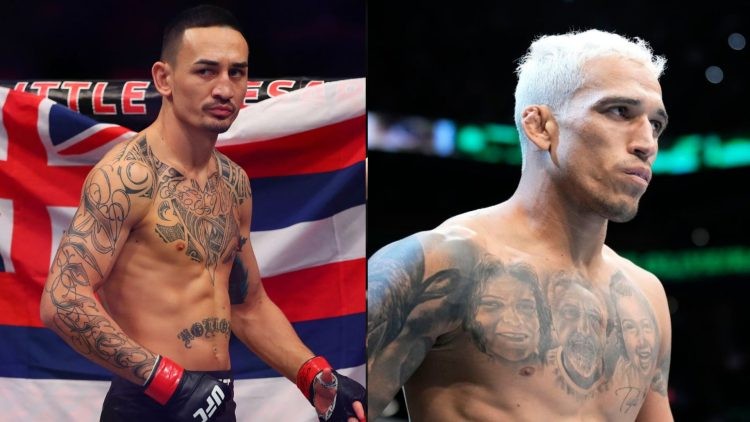 Charles Oliveira has had quite the resurrection in his MMA career. After having a horror run in the UFC from 2015-17, where he lost four out of his six fights, nobody would’ve thought that this man would end up becoming a champion one day.

However, his hard work and dedication have led him to a point where Charles Oliveira can proudly call himself the best lightweight on the planet. This complete turnaround of fortune has earned him praise from all around, including his former opponent, Max Holloway.

Ahead of his highly anticipated trilogy bout against Alexander Volkanovski, Max Holloway sat down for an interview with ESPN MMA where he talked about a variety of topics. During the interview, he also talked about Charles Oliveira. Holloway heaped praise on his former opponent and suggested that it was unfortunate that he was stripped from his UFC Lightweight title. He said:

“That dude’s, dude’s in demon mode right now, you know? It’s funny because everybody keep talking about him quitting and he’d be making everybody call him a quit, quitter. So you know, good for him. He’s been killing it, you know, unfortunate with that, he got stuck with a stickler on the weight with the half like come on bro like the thing was moving like put that thing on the 55 so you know, I just feel bad for the guy.”

It is safe to say that Max Holloway has nothing but respect for his former opponent. The two clashed inside the octagon nearly seven years ago. Blessed’ was able to walk away with a TKO victory after Oliveira suffered an esophagus injury in the first round of the fight.

When is Charles Oliveira fighting next?

Charles Oliveira was last seen inside the octagon against Justin Gaethje at UFC 274. Unfortunately for him, he missed weight by 0.5 lbs and had to be stripped from his lightweight gold. This meant that even if he beat Gaethje, the Brazilian wouldn’t have won the belt.

The best LW in the world 🌎

This is exactly what ended up happening as he secured a 1st round submission victory over Justin Gaethje. There has been a lot of speculation surrounding his future ever since and a number of potential matchups have been discussed.

Charles Oliveira could face Islam Makhachev for the vacant UFC lightweight championship later this year. Moreover, a potential matchup against Conor McGregor has also interested the Brazilian, but nothing has been made of it yet. It will be interesting to see when and against whom Oliveira would fight for the vacant UFC gold.