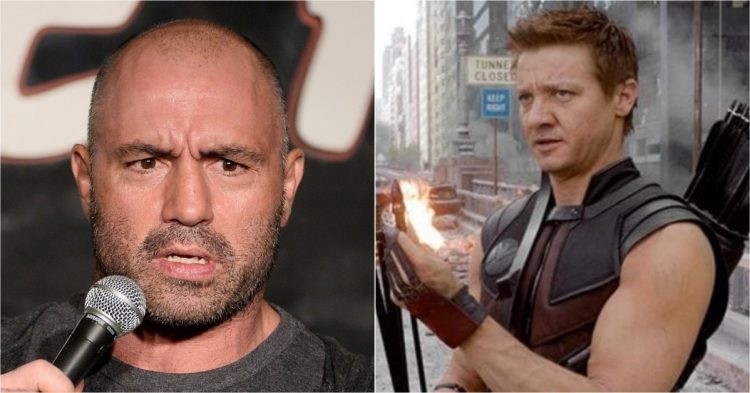 The Marvel Cinematic Universe is one of the biggest IPs in the world today. It has taken over global pop culture with dozens of movies, TV shows, and even a few animated series. One of the most beloved characters from the MCU is Hawkeye, aka, Clint Barton played by Jeremy Renner.

Fans first fell in love with the character when he appeared in 2011’s Thor. However, longtime UFC commentator, Joe Rogan apparently isn’t a fan of Renner’s character.

On the JRE podcast, Joe Rogan explained why he has a problem with the character of Hawkeye. “I gotta say, I hate Hawkeye though. All he has is a bow and arrow. It’s so dumb. Everybody else is the Hulk and f***ing do crazy shit. Doctor Strange can summon universes and this dude is just shooting sh***y arrows.” said Rogan.

This is not the first time Rogan has discussed popular Marvel characters and the people who play them on his podcast.

Joe Rogan seemingly has a hard time suspending his disbelief regarding Hawkeye. However, fans of the MCU love Hawkeye for all the reasons Rogan mentioned. Renner’s character helps ground the MCU where aliens fight gods.

In the midst of literal deities, Clint Barton being a normal human helps humanize the storylines surrounding the Avengers. Renner’s recent venture, the Hawkeye TV series, was lauded by fans, but it seems Joe Rogan isn’t one of them.

What happened to Jeremy Renner after his near-death experience?

Jeremy Renner recently injured himself in an accident, leaving him in critical condition. He was helping a stranded family member, whose vehicle was stuck in the heavy snow. While attempting to free their vehicle, his own vehicle began rolling forward and ran him over. He was immediately taken to a hospital in Reno, Nevada. The accident left him in critical condition.

Renner suffered “chest trauma and orthopedic injuries” which required immediate emergency surgeries. The Hawkeye actor celebrated his birthday within the confines of the hospital. However, his family reported that Renner has been making tremendous progress recently. His sister shared with the Los Angeles Times, “We couldn’t feel more positive about the road ahead.”

On the 3rd of January, Renner posted a selfie from the ICU, proving to his fans how much of a fighter he really was. He wrote in the caption, “Thank you all for your kind words. I’m too messed up now to type. But I send love to you all.” Fans will be hoping that Renner finds the fast lane to recovery and reprises his role as the beloved member of the Avengers, Hawkeye.