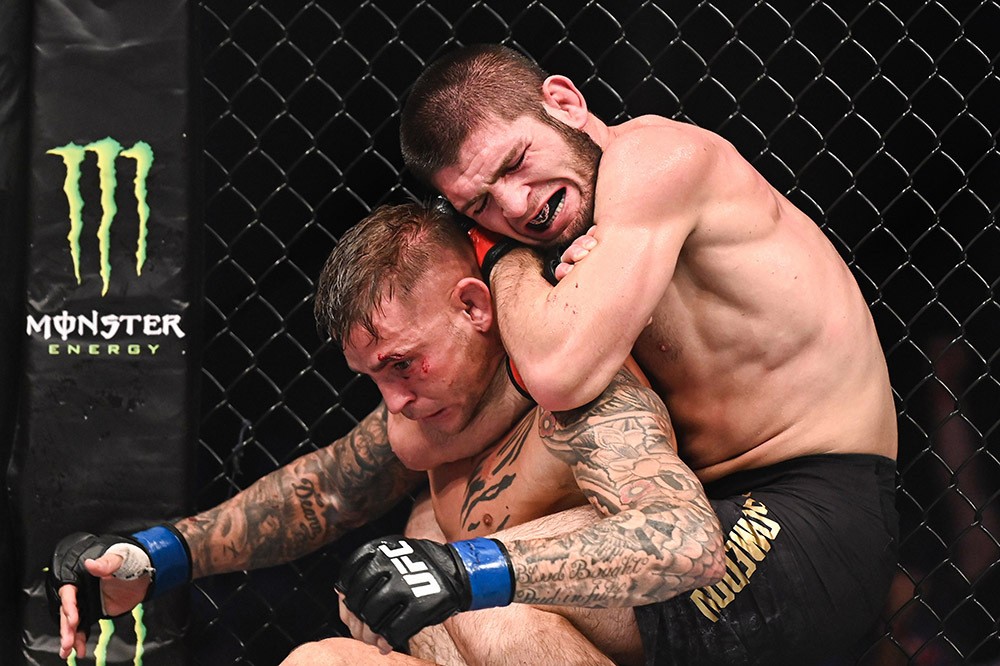 Over the years, Dustin Poirier has solidified himself as one of the greatest UFC lightweights of all time. With wins over Justin Gaethje, Conor McGregor, Eddie Alvarez, and Max Holloway he is easily one of the most accomplished fighters on the entire UFC roster.

However, Poirier’s dreams of becoming an undisputed UFC champion shattered to pieces when he fought Khabib Nurmagomedov for the lightweight title.

Dustin Poirier fought Khabib Nurmagomedov at UFC 242 and suffered a submission loss. Though Poirier has some success against Nurmagomedov it was not enough in the end as Nurmagomedov dominated him the entire fight.

In his recent appearance on the Punchin in the podcast, Dustin Poirier talked about the terrifying experience of fighting Khabib Nurmagomedov in the octagon and stated that Khabib is too advanced on the ground. Poirier said that though Khabib’s power is not overwhelming his technique and balance will trouble his opponent if the fight goes to the ground. Dustin Poirier explained:

“(He’s)Not super strong(talking about Khabib’s power Poirier said). None of these guys that I have fought feel crazy strong towards overwhelming. But his position his balance were so good. He knew where my weight was, where it needs to get into a better position. He is just so advanced. His feet are like hands, his foot sweeps, the way he breaks you down it’s so good. He is so good.”

There was a moment in the fight when Dustin Poirier told his corner that he could not do anything to keep Khabib Nurmagomedov off of him on the ground. And that is enough to explain how the fight played off. Poirier recalled:

“I got smothered. I wanted it to be a fight. And he just smothered me and kind of did what he does. And I could not stop it. And I have been grappling a long time.”

Dustin Poirier will take on yet another elite grappler in Charles Oliveria in his second attempt to capture the UFC lightweight title. Though Charles Oliveira is a lot different from Khabib on the ground he is more offensive and creative with submissions.

Besides that, Oliveira knocking out Michael Chandler did shock some of the fans as he was never considered a striker with knockout power. So it will be a tough test for Dustin Poirier both on the ground and on the feet. But, he will have more success against Oliveira on the ground compared to his performance against Khabib Nurmagomedov.

Dustin Poirier will have the size and power advantage over Charles Oliveira, which might play a crucial factor in the grappling exchanges. However, he certainly needs to be aware of the submission threats against Charles Oliveira.