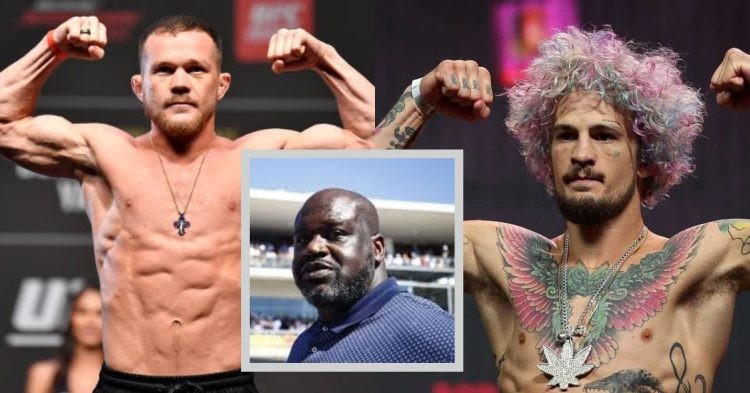 UFC star Sean O’Malley has landed in Abu Dhabi for his fight against Petr Yan in UFC 280, which is scheduled to take place in less than two weeks. ‘Sugar’ recently met basketball legend, Shaquille O’Neal, at an NBA preseason game in Abu Dhabi.

As per the report, O’Malley attended an NBA game and met a few celebrities including ‘Shaq’. In a recent video, O’Malley can be seen having a wholesome conversation with O’Neal while informing them about his upcoming fight. ‘Sugar’ said: “It’ll be Saturday morning. It’ll be a little bit different time.”

UFC 280 will air on Saturday morning in the United States, unlike the usual PPV fights which air on Saturday nights. The NBA legend promised to watch the fight and support ‘Sugar’. O’Neal said:

“I’ll check it out. Irish people gotta stick together. O’Malley and O’Neil, baby… I got you, whatever you need.”

O’Neal claimed a mutual Irish connection with O’Malley and invited the UFC star to attend a party at the Super Bowl next year. However, they do not have any connection to Ireland but ‘Shaq’ claimed their Irish roots because of their surnames.

Sean O’Malley will be going into this fight as a sizeable underdog against Petr Yan. This will be the toughest challenge in O’Malley’s UFC career so far, and a dominant win against the Russian will help O’Malley get a title shot.

‘Sugar’ has amassed a series of bonus-winning fights and showcased the phenomenal skills that earned him a lot of fans. However, he has yet to prove himself against an elite fighter like Yan. O’Malley believes that he is a better fighter than Yan, so this will be an easy fight for him.

This is the biggest fight in O’Malley’s career and he will have the opportunity to prove the doubters wrong who are counting him out. In a recent interview, ‘Suga’ said:

“I’m a little surprised but also I kind of get it from other people’s perspectives. But I believe I’m better than Petr Yan, and I believe I’m going to go out there and beat his ass, so I guess I am kind of surprised.”

Yan has a lot of experience inside the Octagon against some of the best fighters. Not to mention how he beat Cory Sandhagen in a dominant fashion, who is a lot taller than him.

O’Malley will utilize his size advantage over Yan, which might be a game-changing factor. However, Yan’s fighting style is impetuous and he has one of the best striking among the fighters on the roster.

This will be a very electrifying bout and a striking duel. Regardless of who wins, fans will be treated to a very exciting fight on October 22.