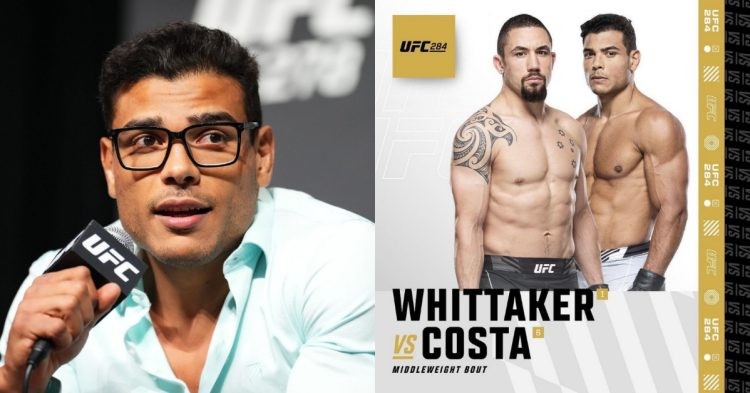 UFC middleweight fighter Paulo Costa is set to return to the Octagon at UFC 284. Costa beat the former champ, Luke Rockhold, at UFC 278. After two disappointing losses against Israel Adesanya and Marvin Vettori, Costa had a nice win over Rockhold and turned his career around. He now has the chance to fight Robert Whittaker at the upcoming PPV in Australia and put himself firmly in the title picture.

Hey guys I’m here again to say the obvious. I don’t have a deal to fight in Perth A lot of fans are sending their regards for this fight, but ITSNOT FOR REAL , anyway see u soon in mma or 🥊 boxing pic.twitter.com/Ieu68Nff4H

However, that fight may not happen after all! Recently, Paulo Costa dropped a bomb through his Twitter account. He let the fans know that he currently does not have a deal to fight Robert Whittaker at the UFC 284 PPV. He outright wrote that the fight is not real. Costa also teased a potential move to boxing as his next endeavor. So what is going on with Paulo Costa’s contract?

In a recent interview with Submission Radio, Costa spilled the beans and shed some light on the issue. Apparently, he only has one fight left on his contract and he does not want to fight until the UFC comes back to him with a better offer.

Not just that, he is also hiring legal representatives to explore the possibility of him getting released from the company. It sounds like Costa is really unhappy with his current pay.

“I haven’t renewed with the UFC. I had a talk with Hunter. He was supposed to get back to me. I asked him about a figure and he was supposed to give me an answer about it. I haven’t gotten an answer. Anything is possible. I have one fight left and I’m not really sure. I’ve got some lawyers looking at the contract. Seeing how it works, because it can also be terminated over time. Maybe I don’t even need to fight to finish my contract.” (h/t via TheBestofMMA)

Although his comments are somewhat shocking, they should not come as a surprise to the fans. Prior to his UFC 278 fight against Luke Rockhold, Costa was very upfront about his dissatisfaction with his current contract. Speaking to Brett Okamoto of ESPN, Paulo revealed that the UFC should have given him a better contract. Although he loves the company, Costa wants better pay.

Borrachinha is actively pushing the demand for better pay. He was so unhappy with his paycheques that he even changed his manager. Instead of Wallid Israel, he is now represented by his real-life girlfriend Tamara Alves. Costa used the tactic of public negotiations previously as well. Before his bout against Jared Cannonier, Costa revealed to the fans that he did not sign the papers to make the bout official.

The bout was ultimately scrapped. It led to a furious Dana White bashing him publicly. However, the two made up since and Dana does not have any problem with the Brazilian fighter any longer. So it will be interesting to see how the company handles the situation.

Will Costa get what he wants and receive a better contract? Or will he try to get out of his contract and engage in a legal battle? Only time will tell.