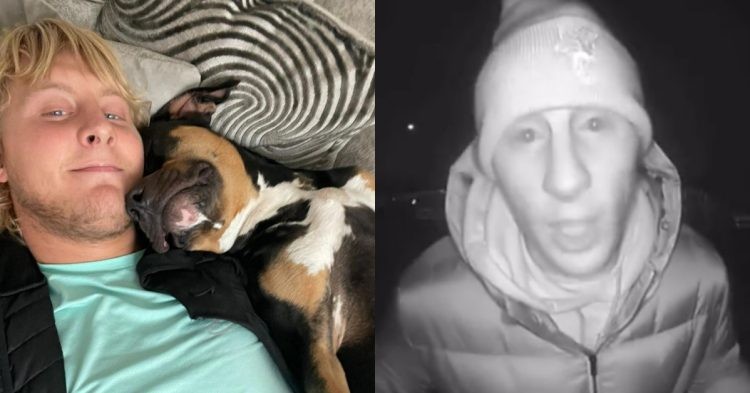 Paddy Pimblett is undoubtedly one of the brightest stars in the UFC right now. However, he is never too big of a star to clean after his dogs. Paddy The Baddy once again proves why he is the salt of the earth. A recent video shows Paddy apologizing to someone because his dogs defecated in his neighbor’s yard.

The Liverpool native, who is a dog lover, was out on a stroll with his pooches. Apparently, his dogs decided to do their business in a stranger’s yard. While some people would have gone away quietly, Paddy Pimblett is not one of them.

Instead of running away, Pimblett showed his class and rang his neighbor. Once he started explaining what happened, the person recognized him immediately! The footage was caught on the doorbell camera.

ALL TIME Ring Doorbell call right here,
Paddy the Baddy is a great lad for letting them know pic.twitter.com/YYAXok97PL

The first thing Pimblett did, he apologized for the mess his dogs created infront of his neighbor’s house. However, the person was pleasantly surprised to see it was Paddy, who was at the front door. Instead of being concerned about the scene, they were happy to be talking to Pimblett.

“Look me dogs just had a sloppy sh*t outside and I was just wondering if you got some water, (because) I don’t wanna leave it outside,” Paddy continued after the owner offered to clean up the mess themselves, “you sure? I just feel, I feel terrible. You know what I mean? They just had a proper sloppy sh*t and I can’t even pick it up with a poo bag, know what I mean… thank you very much once again. I’m sorry about that. I hate doing stuff like that, that’s why I knocked on.”

Fans online reacted to the whole incident very positively. While some called Paddy a legend and others found the whole scenario very amusing.

Here are some fan reactions to the incident

@KyleSosaa718 this the funniest thing I’ve seen all day

Good on the lad for wanting to clean his pups shit. Respect.

Dude is already a legend.

This guy just keeps getting better 😂😂

Paddy Pimblett is loud and brash in his nature of trash-talking. But, his personality outside the Octagon is extremely humble. Paddy is in a relationship with Laura Gregory. However, he revealed a great story about how their relationship started. According to Pimblett, his social awkwardness did not allow him to make the first move on Laura.

Instead, it was Laura Gregory who initiated the conversation. Paddy also cares about his friends deeply. Ahead of his last UFC fight, one of his close friends died by suicide. Hence, he dedicated the win against Jordan Leavitt to his friend.

In the post-fight interview, Paddy gave a passionate speech about men’s mental health. Fans gave Paddy a lot of credit for opening up about his own struggles as well.

Pimblett has also dealt with a lot of body image issues too. The 27-year-old loves to eat and stops dieting outside his fight camps. Naturally, he gains a lot of weight because of it. Fans are used to seeing fighters in impeccable shape at all times. Hence, Paddy’s overweight appearance made him a target for the trolls.

But, the lightweight prodigy handled the situation extremely well and shut up his distractors. Fans are always happy to see him compete and Pimblett will be back in action at UFC 282. He will be in the co-main event of a massive PPV card. The UK superstar will take on Jared Gordon on December 10th.