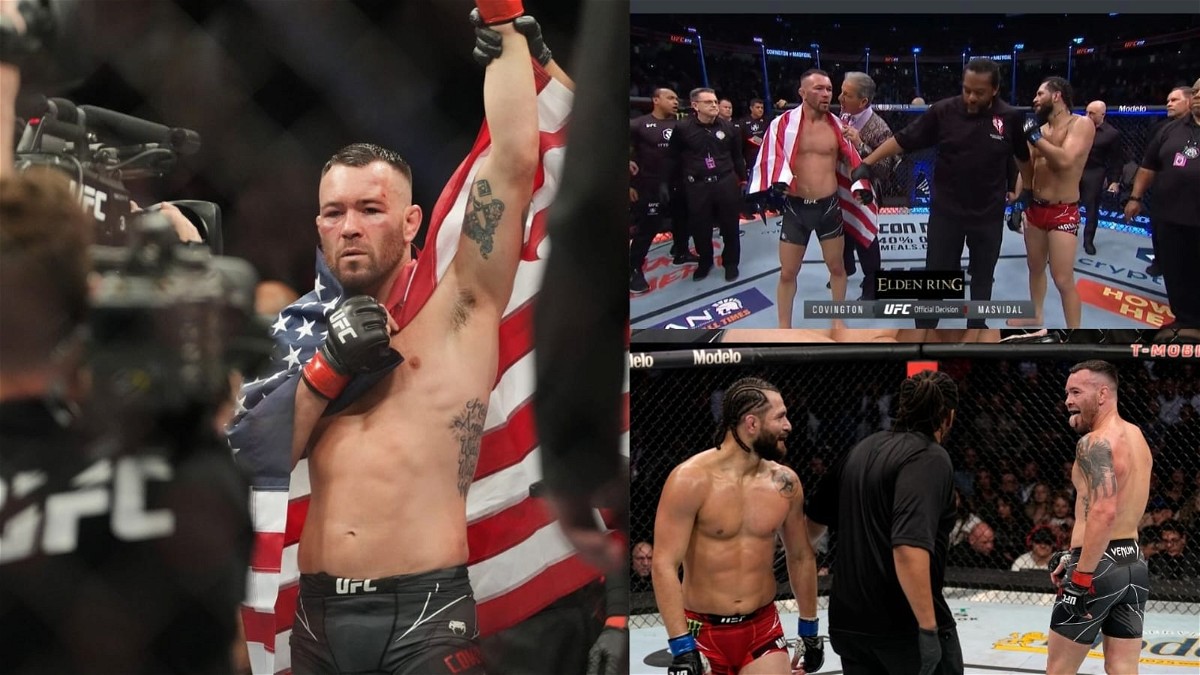 UFC 272 turned out to be a massive success for the promotion and the main event bout got an incredible reaction. The grudge fight between Colby Covington and Jorge Masvidal was very exciting and entertaining as well.

Both fighters showed their fighting spirit and went all out against each other. Covington started the bout by taking down Masvidal in the first round and controlling him on the ground.

And as the night advanced, the story was fairly similar. Covington didn’t give Masvidal any chance to recover or make a comeback. Even though Masvidal did a great job in defending his position for five rounds, offensively he wasn’t very active.

Covington utilized his wrestling to the fullest and dominated Masvidal in every aspect of the fight. After five rounds, he was declared the winner via unanimous decision.

However, Masvidal wasn’t over with Colby after spending the whole 25 minutes inside the octagon. He gestured to Colby to fight more.  But, Colby’s coach came up with a reply to Masvidal and said “Don’t start now you had 25 minutes”

Jorge Masvidal apologies to his kids after the loss at UFC 272:

After an exciting fight, both the fighters were joined by Joe Rogan for the post-fight interview.

During the interview, the winner, Covington thanked his supporters and first responders, military, etc. And after that, he didn’t waste a second to call out his opponent for the next fight.

The ‘Chaos’ revealed that he has defeated Masvidal now it’s time for him to take care of Dustin Poirier.

“Now on to business Joe. I just took care of Miami street trash now it’s time to take care of Louisiana swamp trash. Where are you at Dustin Poirier?, You said it was on-site, name the site Dustin…I will see you soon, you are next.” said Covington.

After a shining performance, @ColbyCovMMA wants the Diamond next ???????? #UFC272 pic.twitter.com/UeNfRTbWou

For Masvidal, it was a tough day at work the ‘Gamebred’ failed to create many chances and capitalize on them.

Except for a few exchanges and an impressive shot to the chin, Masvidal wasn’t getting anywhere throughout the fight.

During the post-fight interview, Masvidal apologized to his kids back home and explained how he is unhappy about his wrestling.

A tough pill to swallow for Masvidal who remains classy in defeat. #UFC272 pic.twitter.com/B9QE3ksPH4

“I was off-beat with the wrestling, I needed to wrestle harder…but I wanna say thank God for everything I got. Thank you everybody for coming out. Sorry to my kids, the only people I say sorry to..my wrestling wasn’t there today, I was flat.”  Said Masvidal.

Nevertheless, it was the end result of the biggest grudge fight of this generation. It will be interesting to see what the future holds for these fighters.