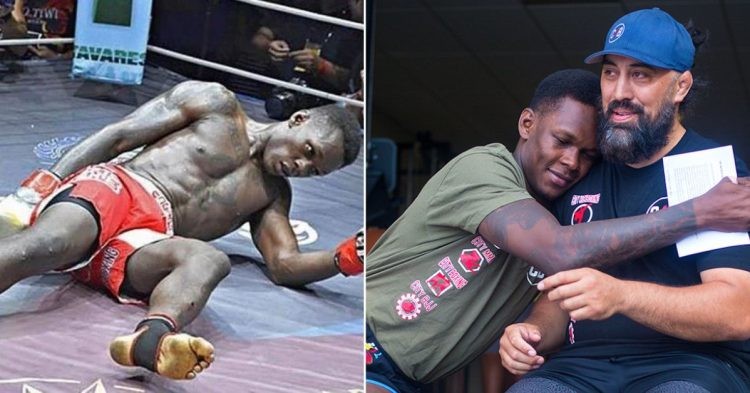 Israel Adesanya’s coach Eugene Bareman says Pereira knocking out Adesanya still haunts him. With four more days to UFC 281, the strongest bout of the middleweight division, coach Bareman was asked how he felt about Adesanya’s KO defeat against former Glory kickboxing rival Alex Pereira in the latest episode of The MMA Hour with Ariel Helwani.

The City Kickboxing (CKB) gym head coach said he still has flashbacks of the fight. Bareman says he did not care about the outcome but was more concerned about Adesanya’s health.

He says he knew what a blow like that could do in the sport. Bareman also admits, after Adesanya’s KO loss he often lied to the champ about getting him a fight because he wanted him to rest and take his time after that loss.

“Nothing about the fight, I didn’t care about the fight then. I didn’t care like well done to Alex and stuff. ‘But my immediate concern even to this day is just flashbacks of trying to get to Israel and make sure he’s okay… and just wondering if the medical care that we had at that time was up to scratch’… Because quite often I chose they’re not.”  – Eugene Bareman said on The MMA hour YouTube channel.

Alex Pereira is the only fighter to knock out Israel Adesanya

Pereira being the only fighter to knock out the middleweight champion, this fight is considered something of a rematch between the middleweights. Adesanya lost the last two time’s when he fought the Brazilian, one via unanimous decision in 2016 and the last one being a brutal knockout in 2017.

After five years, gradually establishing himself as the greatest middleweight in UFC history, Adesanya has improved greatly. Having the best fight IQ in the game, being one of the best strikers in UFC right now, and also being a more well-rounded fighter in the cage, Adesanya has all the tools to get his revenge.

Meanwhile, Alex Pereira has insane power, that left hook is just enough to knock out any opponents if it connects. As fight fans, we cannot wait to witness UFC 281 go down this weekend inside the iconic Madison Square Garden.