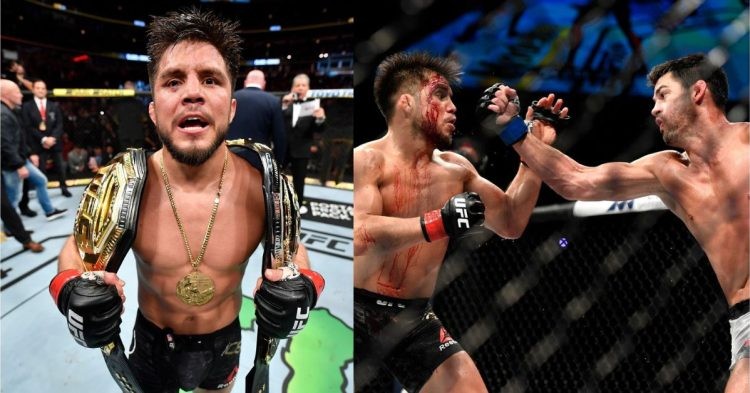 Former UFC bantamweight champion Henry Cejudo stated that he was the highest-paid bantamweight in the promotion before he retired. ‘Triple C’ is now trying to make a comeback since his last win over Dominick Cruz in the co-main event of UFC 249.

In a recent video on his YouTube channel, Cejudo gave his opinion on Sean O’Malley vs. Petr Yan and also picked Yan to win the bout as he is more experienced. But he also added that being the underdog, O’Malley could also win. Talking about the fight, Cejudo claimed to have made millions of dollars for his last title fight at UFC 249.

“…by the way, if you didn’t know, now you know I was the highest-paid bantamweight in the history right before I retired.”

The former two-division champ has apparently eight different properties now and has used his money well to invest in the real estate business. Cejudo continued:

“I made millions of dollars in my last fight. You know and the same reason why I retired is because I was able to use that money and invest that money.”

Henry Cejudo has incredible victories against some of the greatest mixed martial arts fighters in the world including Demetrious Johnson and Dominick Cruz. After retiring from the sport, Cejudo focused on other things in his life as he wanted to retire young.

However, Cejudo is now again trying to get into the octagon and add more victories to his resume, which is already big enough.

Henry Cejudo also discussed O’Malley living a flashy lifestyle and the change in his character from being a nerd to a rich man with face tattoos. ‘Triple C’ suggested that O’Malley in the early stages of his career used to look like Milhouse, a nerdy character from the famous American animated show ‘The Simpsons.’

In the same video, Cejudo opined that O’Malley drastically changed his appearance to create a new persona so that he can promote himself better. Talking about O’Malley’s transformation, Cejudo said: “When he first came into the UFC, he looked like Milhouse…”

“No tattoos, his curly hair, pretty. He’s a little Jolly Green Giant-type kid. And now all of a sudden, he’s got tattoos, he dyes his hair; he’s riding Lamborghinis, sleeping in silk pajamas,” Cejudo added.

However, Cejudo also advised O’Malley not to get distracted by the hype and money and he has yet to prove himself against a tough opponent in Yan. According to Cejudo, “Money is not going to equal world championships”.

Cejudo also implied that O’Malley understands the marketing game too. He also wondered if Sean is buying into his persona after getting face tattoos like the American rapper, ‘6ix9ine.’

The former bantamweight champion advised ‘Sugar’ to have fun but not to get distracted in the process because then he wouldn’t be able to perform to the best of his ability. Sean O’Malley will face Petr Yan on the main card of UFC 280 set to take place at the Etihad Arena in Abu Dhabi, the United Arab Emirates on Saturday, October 22.