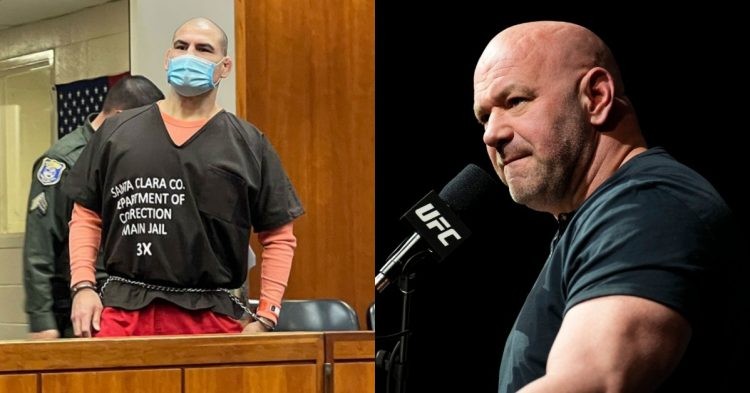 Dana White writes a letter in support of Cain Velasquez. (Images via Twitter)

The ‘Free Cain’ movement has another powerful endorsement as UFC President Dana White joins in. White penned a letter to the Santa Clara Superior Court and vouched for Cain’s character. The former UFC Heavyweight Champion Cain Velasquez has been in jail since February of this year.

Velasquez is currently in police custody as he was charged with attempted murder and other gun-related charges for an incident that took place on February 28th. Cain allegedly chased after Harry Goulrate who is accused of allegedly molesting Cain’s 4-year-old son over ‘100 times.’

He eventually caught up with the vehicle carrying Goulrate and his step-father Paul Bender. He then allegedly shot at the vehicle and one of the bullets hit Bender in the arm. Since the incident, Velasquez has been in jail and it has been 5 months.

Cain’s former UFC colleagues and teammates have demanded Cain’s release. Influential figures such as Khabib Nurmagomedov and Luke Rockhold have voiced their support for Velasquez. But now even Dana White has spoken up on the issue.

In a letter addressed to the court, Dana wrote about what kind of a man Velasquez really is. He stated that in the 15 years of their business relationship, he has never known Velasquez to be anything but a professional and well-mannered gentleman.

To the honorable judge of the Santa Clara Superior Court,

I write this reference in full knowledge of Cain Velasquez’s current charges of attempted murder and assault. I was stunned to learn of these charges against him, as they are completely out of character for the man I was proud to say was a two-time UFC Heavyweight Champion.

I have known Mr. Velasquez for more than 15 years, and during his time as an active athlete with UFC, he represented our company with dignity and always treated others with respect. He was a model example of how a professional athlete should carry himself, projecting a positive image to UFC’s fanbase. Mr. Velasquez was extremely professional and went above and beyond to make a connection with our fans and promote the sport of mixed martial arts—- not only as an entertainment product, but also as a character—building discipline.

As a Mexican American, Mr. Velasquez was proud of his heritage and never passed up an opportunity to visit Mexico on behalf of our company and demonstrate his gratitude
to the Mexican fans for their support.

People who know him best describe him as a humble, soft-spoken man who was very much dedicated t0 his family, including his wife and his two children.

If given the opportunity, I’m sure Mr. Velasquez would like nothing more than to return to his family and continue to make a positive impact on his community.

I sincerely ask that you take this into consideration as you adjudicate next steps in this process concerning Mr. Velasquez.

lf you wish for me to confirm any of the above, please do not hesitate to contact me.

(the letter was first obtained by MMA Junkie)

Cain is currently awaiting a plea hearing which is scheduled for August 19th. But he is set to appear before the court on August 5th.

According to MMA Junkie, Cain Velasquez’s attorney, Mark Geragos has recently filed a 246-page petition to the California Courts of Appeal to either release Cain on bail or to remand the case to a superior court in order to expedite the process. As mentioned above, Cain has been incarcerated for almost 5 months now.

However, judge Shelyna Brown has refused to grant bail to Velasquez three times previously. Cain’s attorney Mr Geragos has argued that there is no valid reason shown by the judge as to why she denied bail to Cain so many times. The defense also put forth the fact that five months in jail without being found guilty is not necessary and is a borderline punishment.

Geragos also stated that there are alternatives to imprisonment. He stated that his client was open to being under government surveillance at all times. The idea of relocation has also been floated as an option. The defense also argued that any further act of violence will mean that Velasquez will not have the chance to be with his family. Hence, he is not a security risk to the victims of his alleged shooting anymore.

If Cain is convicted, he may serve up to 20 years in jail. The number may go up if he is found guilty of any of the other charges that were brought against him.