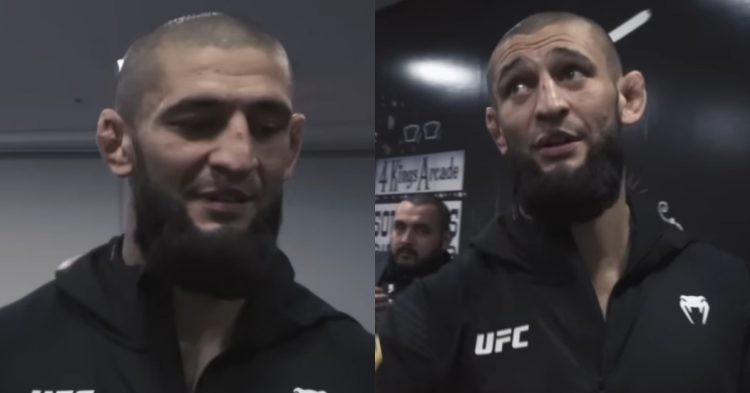 Khamzat Chimaev had a chaotic week leading up to UFC 279. He was supposed to get his first big main event slot against Nate Diaz at the PPV. However, everything fell apart at the last possible minute. On the day of the weigh-ins, Chimaev was grossly overweight. He came in at 178.5lbs, whereas the weight limit was 171lbs.

Because of that, Chimaev was taken out of the main event slot as punishment. Instead of Nate, Chimaev had to take on Kevin Holland in the co-main event of the card. But, the debacle seemed to provide him with some fuel to his fire and Khamzat went on to annihilate Holland in the first round of the contest. He submitted Kevin via D’Arce choke.

However, it did not quench Chimaev’s thirst. In a recently released video, he could be seen reacting to the main event fight between Nate and Khamzat’s replacement, Tony Ferguson. The main event also ended in submission as Diaz beat Tony via guillotine choke in the 4th round.

It seemed to anger The Borz, not at Nate, but at himself for missing weight by a huge margin. Out of anger, he slammed a water bottle and yelled out, “F***ing didn’t make my weight. I swear I would have killed him.”

Although Chimaev had a great performance against the Trailblazer, his stock definitely took a hit after UFC 279. UFC does not take its headlining fighters missing weight kindly. So it remains to be seen when Chimaev gets another chance to fight in the main event of a PPV card.

Khamzat Chimaev will not look to accept another fight at welterweight anytime soon. His head coach Andreas Michael gave a detailed description of what really went down during the night before the weigh-ins. According to him, The 28-year-old was cramping up and vomiting while cutting the weight. Hence, Michael took the initiative and asked Khamzat not to cut weight anymore.

So it is obvious that making the cut down to 170lbs is a big task for the Chechen fighter. But, it is not really surprising given his height and frame. He not only is massive for welterweight, but Chimaev also has the power to flatline 185lbs fighters with a single punch as well, Gerald Meerschaert for example. Hence, Andreas also revealed that his student will move up to middleweight for his next fight.

There are options for Khamzat Chimaev in middleweight as well. He has beef with Paulo Costa and they almost came to blows recently. So, it will be the perfect way to kick off his permanent move to the weight class. Will it happen? Only time will tell.