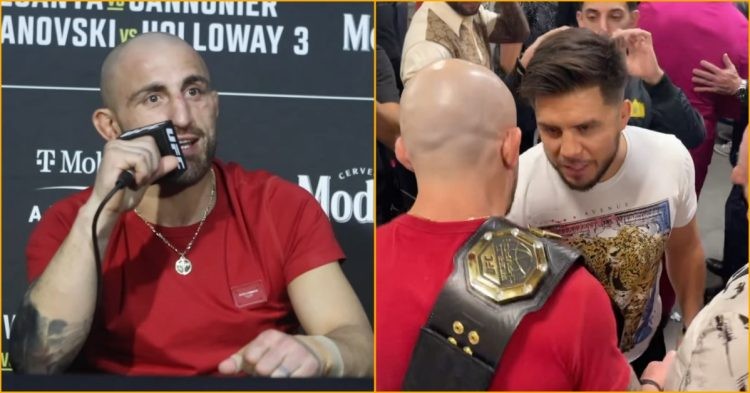 UFC Featherweight Champion Alexander Volkanovski defeated Max Holloway for the third time at UFC 276. There were question marks on the result of their previous two bouts at UFC 245 and 251 respectively. But the champ left no room for any kind of doubts this time as he handed Max Holloway the beating of a lifetime!

Former flyweight and bantamweight champion Henry Cejudo was in attendance for the event in Las Vegas. In the past, Cejudo had a lot of harsh things to say about Alex. But he seemed to put aside his personal feelings about the Aussie and congratulated him following his victory. During their exchange, Henry stated that all of his previous call-outs were from a place of competitiveness,

Triple C was very humble during his conversation with Volkanovski and revealed that the only reason he wanted to fight the 33-year-old was that Herny wanted to challenge himself. Alex also seemed to be intrigued by the idea of facing Cejudo in the future.

Alexander Volkanovski is open to facing Henry Cejudo after UFC 276

In the post-fight press conference, Alexander Volkanovski addressed the backstage conversation between the two. After the win over Max, he called out Charles Oliveira for the vacant lightweight title fight. However, that did not stop Alex from wanting a big-money fight against the former UFC double champ Henry Cejudo. He stated,

“He wants to challenge me. He thinks he’s got what it takes. Man, I need challenges right? But they need to be big fights and if people scream for it, we’ll see. You can never say never. Like obviously he has done big things wherever he’s got work to do. I think it could make a big fight.”

Volkanovski then went on to praise the 35-year-old. The 145lbs champion went on to list Cejudo’s accomplishments and revealed that he has a lot of respect for Triple C. Aside from being an Olympic gold medalist, Henry was the third person to ever hold two divisional titles simultaneously. Hence, Cejudo is certainly a credible threat to Volkanovski.

Although the fans rate Cejudo for his wrestling, the former champ has made a lot of improvements in terms of striking as well. In his last fight against Dominick Cruz at UFC 249, his striking made all the difference. Not only did Henry land some stabbing leg kicks, but he also showed how efficient he was with his power punches. In a lot of ways, his style is pretty similar to Alex’s.

Volkanovski has pretty much cleared out the entire featherweight division. Although he wants to take on Charles for the 155lbs title, Islam Makhachev is the favourite to get the fight. Hence, staying busy with a dream fight against Henry Cejudo may not be a bad option for one of the best pound-for-pound fighters in the UFC.