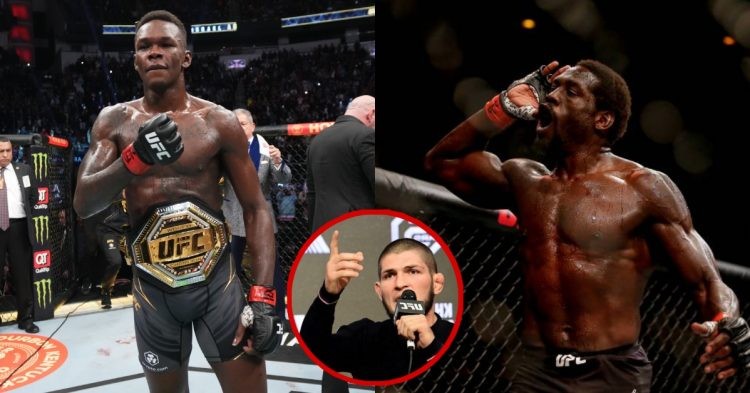 Khabib Nurmagomedov weighs in on the upcoming UFC middleweight title fight between Israel Adesanya vs Jared Cannonier. According to the former UFC lightweight champion, Israel Adesanya will be the favourite to win the bout at UFC 276.

Israel Adesanya vs Jared Cannonier is shaping up to be an amazing and worthy main event for the International Fight week card. While Adesanya has had 4 back to back defences of the middleweight title, Jared Cannonier is coming off two impressive wins over Kelvin Gastelum and Derek Brunson.

Adesanya made claims that he would beat as easily as he did Paulo Costa. But Jared Cannonier is set to take a much more conservative approach and wants to focus on putting up a complete performance instead of being a one-trick pony. While the fighters seem to be singing in two different tones, the fans are confused about who to pick as the winner.

But Khabib Nurmagomedov has no doubts about his pick for UFC 276. In a recent interview, The Eagle broke down the fight between Stylebender and The Killa Gorilla. Although Nurmagomedov has given Cannonier his due credit, he is still siding with the champ, Khabib said,

“Honestly I think it’s gonna be a very close fight in middleweight division, like Adesanya vs Cannonier. But I think like, Adesanya little bit step away, one foot away from Cannonier on class, if you talk about class.”

“(Adesanya) have much more speed than Cannonier. He have more accuracy with kick, with punch, more experience and I think like 70-30. I think Adesanya gonna win.”

Khabib Nurmagomedov thinks Israel Adesanya will win against Jared Cannonier at UFC 276 and the oddsmakers agree with him. According to Betting News, The 32-year-old champion is a -440 favourite while the challenger is a +330 underdog. It gives an indication of how the experts see the fight going.

Israel Adesanya is the superior striker by a long shot. Hence, rushing Izzy will not be a good choice for Cannonier. On the other hand, focusing strictly on wrestling will not be enough to earn him a victory either. Hence, the 38-year-old will have to put on the performance of a lifetime to win the 185lbs championship.

However, Jared does have significantly better grappling skills than Izzy. As even the champ himself pointed out, Cannonier will be much stronger than any other opponent he has ever faced.

Jared has competed in both heavyweight and light-heavyweight, as a result, he will perhaps be the strongest wrestler to ever come across the champ. Although he is the underdog, Cannonier is capable of causing an upset.