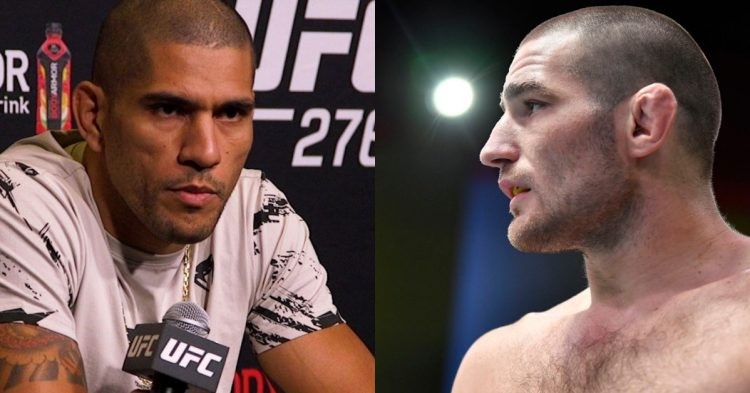 UFC middleweight champ Alex Pereira has built up quite a reputation for his scary appearance. Alex added to his legend at UFC 281, when he knocked out Israel Adesanya in the 5th round. However, even Pereira is not devoid of fear. Poatan recently revealed the only man who scared him in the UFC so far and the name may shock some fans. It is none other than Sean Strickland!

In July earlier this year, Alex took on Sean Strickland on the main card of UFC 276. The Brazilian kickboxing legend did not struggle that much to get the win. He landed a big hook, which put Strickland down at the 2:36 minute mark of the first round. But recently, Alex revealed that facing Strickland was not the most pleasant experience of his life.

In the build-up to that fight, Sean had some wild interactions with then-champ Israel Adesanya. Although Alex had respect for Sean, Tarzan’s over-the-top antics did not impress Pereira at all! Instead, Sean’s trash talk had the opposite effect on Alex. The 31-year-old’s comments made Alex more comfortable about the prospect of fighting him.

“Talking about my last fight, [Strickland] had 25 fights, was doing well in the UFC, ranked No. 4 in the middleweight rankings, he’s dangerous, he’s experienced. I was scared, but when I heard him talk, I relaxed a little bit. He is a good fighter and an experienced one, but he was talking some stuff that didn’t make any sense.” (h/t via seanstrickland_mma)

One of the reasons why Sean Strickland has become a recognizable name in the MMA community is his trash talk. Strickland often makes controversial comments and does not care about his reputation. His daring attitude has made Strickland a fan favorite in the UFC.

But, all the drama stops when he steps inside the Octagon and his sole focus turns to his opponent. Sean’s stoic nature inside the cage scared Alex Pereira. However, it also let him know that he will have to be on his toes at all times. Even a single mistake against Strickland during the contest can prove fatal in the Octagon.

“I thought ‘This guy wants to kill me’ I’m telling you, this was a different guy from everything else. But in the end it was good that he entered the octagon this way, because it woke me up, I became aware of the danger, I knew I couldn’t make mistakes. I said damn, he’s different in here, you have to be careful with this man. I went in smarter and managed to catch him.”

Sean Strickland also took notice of Pereira’s comments. Strickland gave Pereira all the credit immediately after the fight. He admitted his mistakes during the bout and blamed his overconfidence for the loss. After Pereira’s comments about him surfaced online, Strickland took to Instagram to react to them. He wrote, “I was ready to die… just wasn’t ready for the hook lol”.

After that particular contest, Poatan went on to fight Israel Adesanya inside Madison Square Garden arena for the 185lbs belt. Pereira won the title in a spectacular fashion and become the champ in only his 4th fight in the UFC. Sean Strickland, on the other hand, has not fought since then. He is scheduled to fight Jared Cannonier on December 17th, at an upcoming UFC Fight Night event.