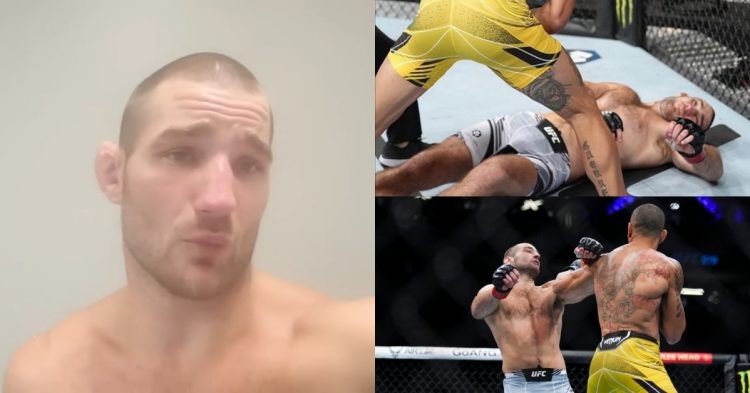 Sean Strickland suffered a brutal loss to Alex Pereira at UFC 276. The bout had a lot of stakes behind it as the winner was set to fight Israel Adesanya for the middleweight title next. Although Sean had more tools in his arsenal to win the bout, it was Pereira who rose to the occasion and won the bout against Strickland.

The 31-year-old made some crucial mistakes in the contest which made the fight much easier for Alex. Pereira is one of the best strikers that Sean has ever come across in his career. Hence, he should have tried to take away his opponent’s best weapon by shooting for an early takedown.

Although Strickland was more equipped to get a win out of the bout on the mat. But instead of focusing on his strengths, Strickland decided to stand right infront of Pereira and became an easy target to hit. Although he did manage to sneak in a few punches, Pereira got the last laugh. During an exchange, a Pereira landed a big hook that almost put Sean out on his feet.

DON’T PLAY WITH THE POWER OF POATAN 🤯

Although Strickland tried his best to survive, Pereira’s power was too much for Tarzan to recover. The bout ultimately ended at the 2:36 minute mark of the first round.

Sean Strickland seemed extremely disappointed after the bout. Although he was on wobbly legs, Strickland walked away after the stoppage in a show of utter disappointment. Sean, who is usually known for being an aggressive talker, gave a very humble breakdown of his performance. Admitting his mistakes, Strickland said,

“Well, that sucked. You never wanna be someone’s highlight. But that’s the game we play. Now I tried to stand and bang with one of the best kickboxers. The sh*tty part was, during the round, I kept thinking, ‘Man! This is gonna be an easy fight.”

“I see everything this guy is throwing, I’m getting the better of the exchanges, I’m gonna beat this guy up for 3 rounds and then halfway through I got caught. So hats off to Alex. He is a fu**ing killer.”

He then proceeded to thank all of his coaches and fans for all the support. Strickland promised to go back to the drawing board and try to climb up the rankings once again. Who may he face next? In the main event of the night, Israel Adesanya beat Jared Cannonier via unanimous decision. Hence, Cannonier vs Strickland may just be the way that UFC decides to go.