“I Walked Away With $110,000”- Aljamain Sterling Reveals His Fight Purse for Title Defense Against Petr Yan 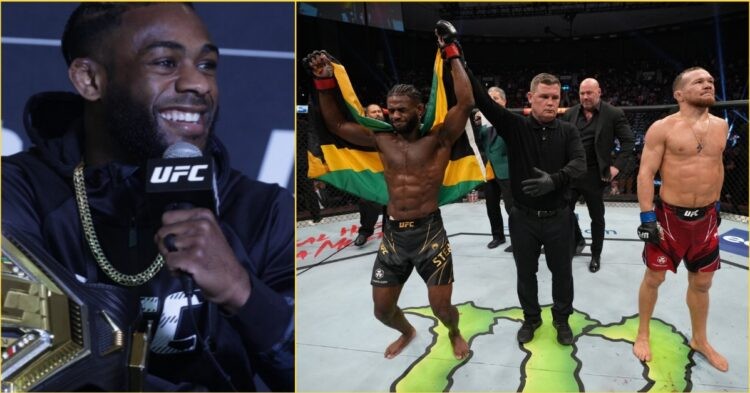 UFC Bantamweight Champion Aljamain Sterling reveals his fight purse for UFC 273! The champ reveals that he bagged $400,000 for his last fight against interim champion Petr Yan. The fight purse itself is very much on par with what the champions usually get paid in the UFC. But that the fighters usually do not get to keep the entirety of the bout and Aljo apparently only took home $110,000.

Fighters usually do not make the walk to the Octagon on their own. They have coaches and cornermen that they have to take care of. As a result of that, they have to give up a significant chunk of their money to compensate their staff. But in Aljo’s case, on top of paying his coaches, he also owed money to get through the pandemic. Hence, he almost had to give up $290,000 of his purse which is the majority of the amount. He said,

“I probably walked away with about $110,000. Now I get to spend that, and have to budget it, and I’ve got to put away money for savings, and put away stuff for my investments, so now have to budget all this out to make sure don’t go broke. So it sounds like, ‘You made a sh*t ton of money! and yes and no.'” (h/t via MMA Island)

The situation once again brings up the question of fighters’ pay. Becoming the UFC champion is the pinnacle of the sport for all the MMA fighters. Hence, reaching the very top should also come with a certain sense of financial security. Although $400,000 is certainly not a very small amount, it is not the most that a UFC champion can make. The fans have seen the likes of Conor McGregor and Khabib Nurmagomedov make a boatload of money. Although Aljo is not as much of a draw, being a UFC champion should generate more money for the fighter.

When is Aljamain Sterling fighting next?

If the financial situation is indeed true, Aljamain Sterling will look to come back much earlier. He almost took off a year due to a shoulder injury that he suffered in 2021. But he silenced all his doubters when he thoroughly outclassed Yan in the majority of their rematch at UFC 273. He also called out the former 135lbs champion TJ Dillashaw afterwards.

TJ was stripped off his belt after testing positive for EPO for his flyweight championship bout against Henry Cejudo in 2019. He subsequently had to serve a 2-year ban which was lifted last year. Upon his comeback, TJ defeated Cory Sandhagen via a split decision.

Dillashaw is currently ranked at no. 2, just behind Petr Yan. Hence, the road for him to fight for the belt is clear. At this moment, however, there is no word when the fight between Aljo and TJ may take place. But there is a big chance that it takes place this year itself.