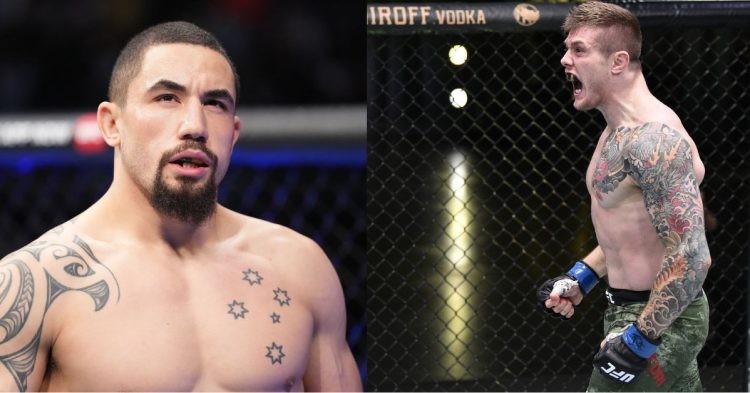 Robert Whittaker vs. Marvin Vettori for the co-main event of UFC Paris

Former middleweight champion Robert Whittaker is set to face Marvin Vettori in the co-headliner of UFC Paris on September 3. ‘The Reaper’ has lost only once since he dropped his belt to Israel Adesanya back in 2019.

Speaking on Submission Radio, Whittaker was asked about his intentions ahead of this fight. The Australian fighter knows that Marvin is a top contender and one of the fighters who are very hard to finish.

Whittaker claimed that he’s looking to put Vettori’s name to the test and is hoping to be the first fighter to knock out the Italian fighter in his career. ‘The Reaper’ said:

“I wanna hit him as hard as I can and I’ve been working on hitting hard.”

“That would be amazing to be the first one to finish him. These guys at the top level, they are very hard to finish. Yeah, they are there for a reason, everyone is tough,” Whittaker concluded.

The Australian has only two losses in his middleweight career and both of the losses came against Adesanya. Though he failed to recapture the title at UFC 271, losing via decision to ‘The Last Stylebender’, he has managed to keep his position in the top 3 middleweight division.

Robert Whittaker has been training hard and will be hoping to be the first one to finish off Marvin Vettori. The Italian fighter has been in the cage with the current middleweight kingpin Israel Adesanya but lost via decision the times.

The Australian has been pretty clear about his intentions and understands that Vettori has never been knocked out before. Marvin is a brawler and Robert knows it as well. However, he is confident that he will finish Vettori to get another title shot against Israel Adesanya.

Ahead of stepping into the octagon against Vettori, he made a statement that he will put on a show. In the same interview, ‘The Reaper’ said:

Meanwhile, Vettori will return to the octagon after almost a year since his battle with Paulo Costa. If he can beat Whittaker, he can see himself in the title picture. He believes he can beat the undefeated middleweight champ Israel Adesanya if they ever meet for a third time.

This UFC Paris will feature the #2 contender in Robert Whittaker going on against #3 ranked Vettori in the co-main event on September 3. While both of them are on the top of their division, only the best man will look at himself getting in the octagon with Adesanya for a trilogy.