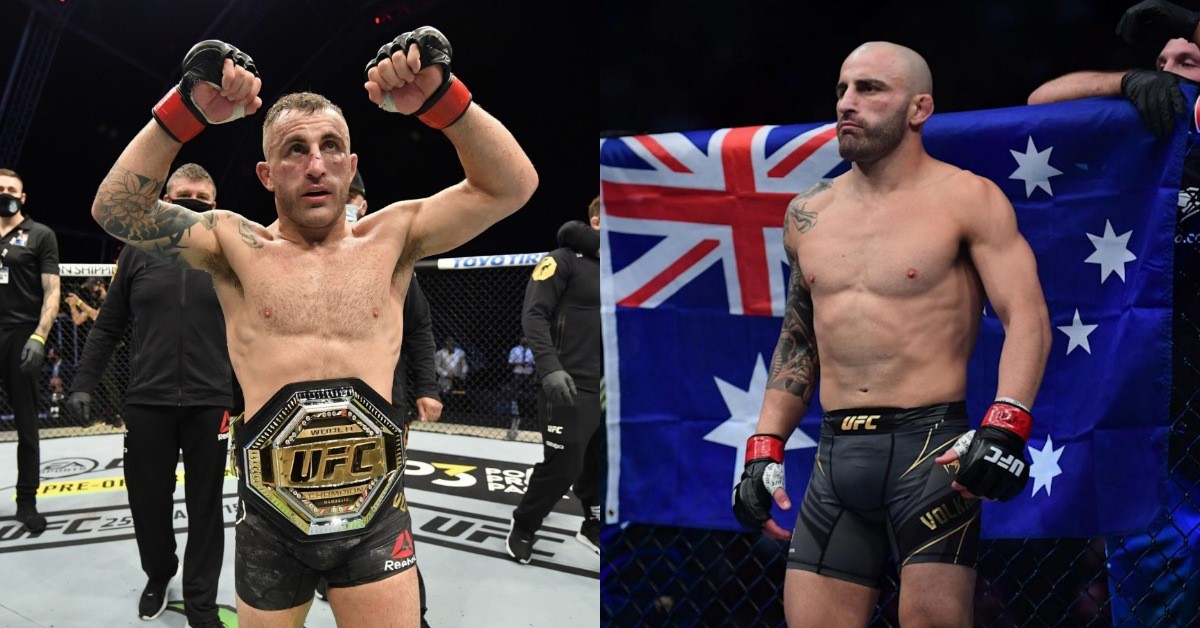 Alexander Volkanovski wants to be a UFC double champ. (Images via Twitter)

UFC Featherweight Champion Alexander Volkanovski thinks moving up and winning the 155lbs belt will not be a very hard task! In a recent interview, Volkanovski once again expressed his desire to become a champ-champ in the UFC.

Alexander Volkanovski defeated The Korean Zombie in the main event of UFC 273 to defend his 145lbs strap. He seemed to be at the peak of his powers as Alex thoroughly dominated Zombie to complete his third title defence. But the champ has no time to rest as he is already preparing to go up against Max Holloway at UFC 276. However, what is next for the champ if he wins on July 2nd?

The Aussie recently appeared on The MMA Hour to discuss his future in the UFC. Speaking to Ariel Helwani, the champ revealed that moving to the lightweight division may soon be a possibility. According to Volkanovski, he does not see it as a quest which is unrealistic. He seems unimpressed by the skillsets of the 155lbs fighters. Alexander Volkanovski said,

“I’m looking at [UFC lightweights] and I see great opportunities in that fight… I don’t look at this as that big of a challenge…I want to go for that double champ status. Believe me, it ain’t going to be as hard as what some people think it’s going to be to do.” (h/t MMA FIGHTING)

The UFC president Dana White seemed supportive of the idea. In the UFC 274 post-fight press conference, White stated that he will allow Alex to fight for the lightweight championship if Alex keeps on winning. UFC has previously allowed champions to move up/down in weight to have a chance of becoming a double champ. Most recently, the middleweight champ, Israel Adesanya fought Jan Blachowicz at UFC 259 for the Light-heavyweight title.

Alexander Volkanovski’s idea to move up in weight is certainly a good one. However, it hinges on the result of the upcoming trilogy bout against Max Holloway. But if Volkanovski gets his hand raised once again, at that point, he will have nothing left to accomplish in the featherweight division. Alex has already beaten all the top-ranked fighters in the division. Hence, embarking on a new adventure will keep his brand fresh.

But can he become the champion at lightweight? It will be difficult for sure. Fighters like Justin Gaethje, Islam Makhachev and Charles Oliveira are no pushovers by any means. On top of that, they will have a significant reach and height advantage over Volkanovski. Although he has a very good chin, can Alex withstand heavy punches from Oliveira, Gaethje, Poirier or Conor McGregor?

On the mat, Volkanovski will also be at a disadvantage against Charles Oliveria and Islam Makhachev. Despite being equally talented, the difference in size and strength will be a big factor during grappling exchanges. It may not be impossible for Alex to win the UFC Lightweight Championship, but the task will not be a walk in the park either!