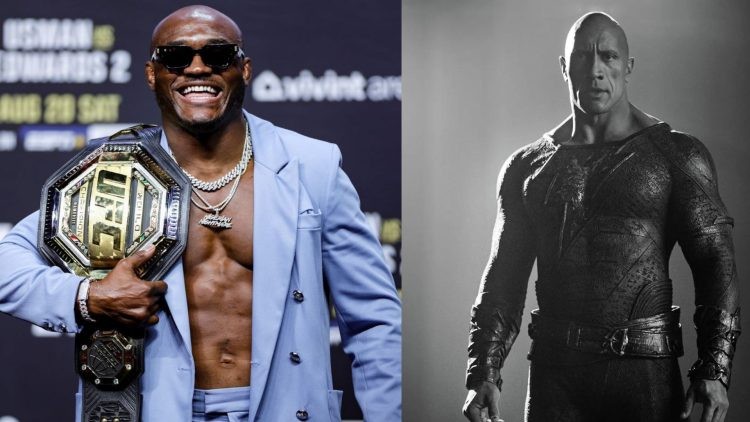 Kamaru Usman and The Rock

Kamaru Usman is considered the greatest pound-for-pound fighter of all time in the UFC because of his dominant run in the welterweight division.

‘The Nigerian Nightmare’ will defend his title for the sixth time at UFC 278 against Leon Edwards. On the media day of UFC 278, Usman detailed how focused he is on this fight, despite getting money and fame.

Usman will look to defend his belt for the sixth time at UFC 278. On the media day for the event, ‘The Nigerian Nightmare’ claimed that he is still driven despite his fame.

The welterweight champion also explained how he finds new motivation after all the accomplishments and fortune he has amassed. He stated that despite getting a break in Hollywood, he continues to work hard to get better and is now fixated on becoming even bigger than Dwayne Johnson:

“I put the work in and I got that. But that doesn’t stop me. I want to be bigger than Dwayne Johnson. I’m not bigger than him, so that means I need more work.”

Johnson made his feature film debut in 2001’s “The Mummy Returns” playing “The Scorpion King” and then found his first franchise when he appeared in the fifth installment of the popular “Fast and the Furious” series alongside Vin Diesel. Since then, he’s appeared in many movies and two more franchises “G.I. Joe: Retaliation” and “Journey 2: The Mysterious Island.”

Kamaru Usman recently shared some insights about his acting debut in Hollywood. The welterweight champion is set to feature in the highly-anticipated Marvel movie Black Panther: Wakanda Forever, which will be a sequel to the 2018 blockbuster Black Panther.

Talking about the movie and experiences working in a new field, ‘The Nigerian Nightmare’ admitted that acting isn’t easy and working 14 hours a day is very hard.

Usman admitted that only after going through the experience as an actor he realize how hard it is. When asked about the much-anticipated movie, Usman stated:

With his big break into movies, some critics have also been wondering if the ‘Hollywood’ element has been getting into the mindset of the champion. The welterweight champion cleared the doubts and also warned if Edwards is underestimating him, then he will be making a huge mistake.