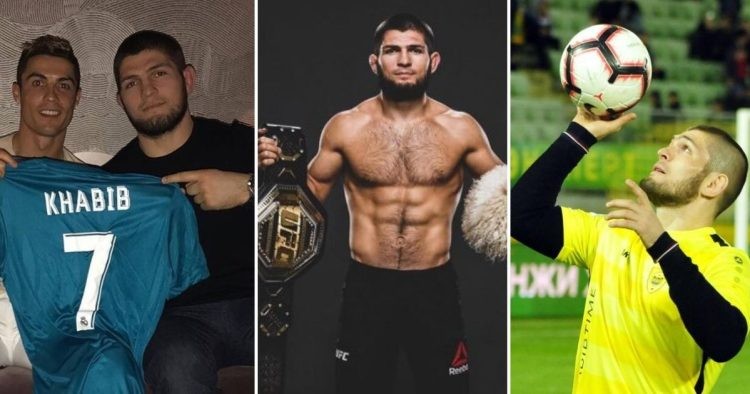 Khabib Nurmagomedov retired from the world of combat sports back in 2020 in a glorious fashion and arguably with one of the best MMA figures of 29-0-0.

While the whole MMA world is jumping ships from MMA to Boxing, Khabib here is willing to take a different leap by playing or getting involved in professional football/soccer. With the transfer market for football in full swing, he has put himself in the shop window by announcing he is ready to sign on the dotted line for a club if a professional deal is on the table.

In a recent press conference in Kazakhstan, The Eagle was asked about his interests in playing soccer and which teams he would like to play for. To which Nurmagomedov stated – he is more like to play in Premier League, England.

On his Instagram page, he has mentioned several times that football is his first love and he would love to get involved in the sport.

“A lot of football clubs, they have offered me [a deal]. If some club offered me an interesting offer, I’m going to accept it because it’s my childhood dream. I love football, I’ve been following it since I was a child. It’s my first love.”

Read More: The Only Fighter Who Has Dropped UFC Welterweight Champion Kamaru Usman

When asked that he would play for Kazakhstan, The Eagle replied, “Honestly no, if I were to play, it’d probably be in the Premier League. Not the Russian one, in England.”

“I’m almost 33, I don’t think I have a future in professional football but I want to get involved in football. I have some projects in the works, maybe I’ll create an academy, I’m working in that direction and I think you’ll hear about it soon.”

“As far as playing…You probably understand that going pro at 33 with no amateur background and to be an anchor in a team’s roster isn’t desirable. Professionals play there. If they’d come to watch and score for me, that’d be simply hilarious. I remember a serious guy once said ‘If you can’t dance, does it mean you can’t not dance as well?’

Khabib told Match TV that he has discussed these possibilities with UEFA president Aleskandr Ceferin, with the owner of PSG, and even with Cristiano Ronaldo. Nurmagomedov has reportedly received interest from third-tier Russian football clubs Dynamo Legion and FC Kamza.