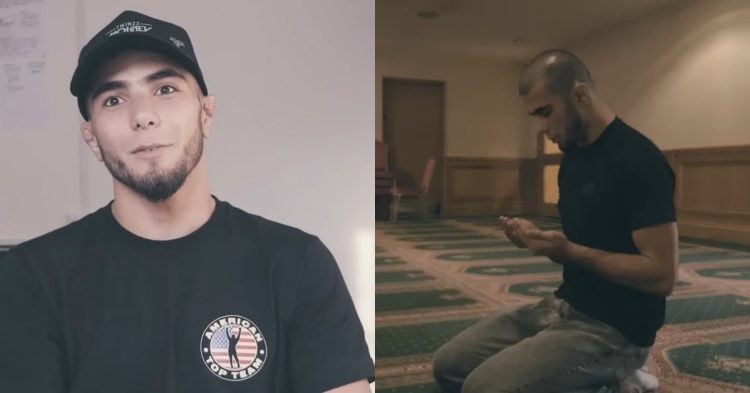 Muhammad Mokaev wants to leave the sport of Mixed Martial Arts (MMA) very soon! The Dagestan-born fighter recently stated that he wants a life outside MMA and wants to retire from the sport while he is at the peak of his power as a fighter. He does not want to linger around as he is gradually becoming more and more family oriented.

Nicknamed ‘The Punisher,’ Mokaev made his UFC debut at the last UFC London event in March. He submitted Cody Durden in the very first minute of the fight with a guillotine choke. But, according to the man himself, he may not be around for much longer. In a recent interview with Full Reptile, Muhammad revealed why an early retirement might be on the cards.

“Basically, it’s forbidden (in my religion). It is forbidden. That’s why I want (to leave the sport). The more I fight, the more I’m successful. I want to leave this sport. So in the future, I think yeah. I think I will leave soon.”

How long has Muhammad Mokaev been fighting?

Born on the 30th of July, 2000, Mokaev was originally a citizen of Dagestan. He was born in the Buynaksk region of the country. However, Mokaev now resides in Manchester, England. The 21-year-old made his pro debut in 2020 and has a record of 7-0. But he has been around the circuit as an amateur fighter long before that.

According to Tapology, Mokaev has an amateur record of 23-0. He has been fighting since 2015, which means he has spent a significant period of his life training for MMA. His hard work has also been very fruitful as he is yet to be beaten throughout his amateur and pro career. Hence, there is a lot of hype surrounding the young Englishman.

He holds 3 submission wins, 2 knockouts and 2 decision victories so far in his career.

But being the top professional that he is, it takes a lot of dedication to accomplish what he has so far. It looks like the extra hours on the mat have taken a toll on the UFC flyweight fighter. He cited other professional fighters as examples and stated that he is not the kind of athlete who does not take his job seriously and party around.

But at the same time, he is slowly getting turned on to religion. As he mentioned before, fighting is not something that is widely accepted in his religion. Although he is not going to quit anytime soon, Mokaev wants more of a personal life outside the sport once he finds some success.

“I have been focused in this game. When you focus, you get tired of this. Especially I have family. Now I’m more into religion. I’m still not there but I try my best. I think there’s better life. I want to see better life than sport.”

The fans have seen other fighters retiring way ahead of their time previously. The biggest example of that is Khabib Nurmagomedov. He retired with an unbeaten record of 29-0 because of a promise that he made to his mother. Even UFC welterweight contender Khamzat Chimaev spoke previously on how he may hang up his gloves as well to make his mother happy.

Muhammad Mokaev will have his second UFC fight in his home country as well. He will take on Charles Johnson inside the O2 arena on July 23rd at UFC London.