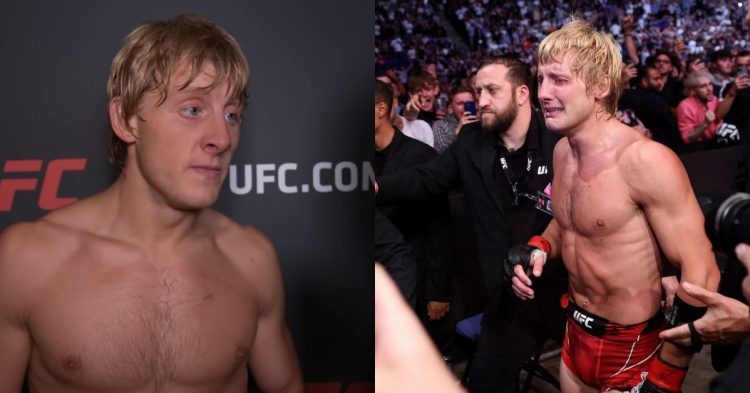 Paddy Pimblett just earned the biggest win of his career at UFC London. After being put in a few tricky positions, Pimblett went on to submit Jordan Leavitt in the second round of the fight. Following the win, Pimblett delivered one of the most passionate post-fight interviews in UFC history.

Paddy advocated for men’s mental health during his interview with Michael Bisping inside the Octagon. It was a surreal moment as the fans inside the O2 Arena were moved by what Paddy had to say. If Pimblett’s distractors had any doubt about his star power, this event was the perfect example to shut them up. During his walkout, Paddy received the most amount of cheers out of any fighters on the card.

British crowd is known for backing their own, but their excitement to see Paddy in action was on a different level entirely. However, The Baddy did not think any of this would ever happen. Although he just made his UFC debut in 2021, Paddy had the chance to join the company before that. But he declined the offer because he did not think he was ready.

But Pimblett started to regret that decision after a couple of losses at Cage Warriors in close succession. It made him doubt his chances of being able to ever fight in the UFC. He spoke about the matter and how it affected his mental health in an interview with BT Sport after submitting Leavitt.

“People think bottling stuff up, bottling stuff up makes it better. I’ve been there. When I lost on Cage Warriors years ago and I broke me hand again, I thought ‘oh my god, I’ve turned the UFC down twice, I’m never gonna get into UFC.’ For about 3-4 months I was waking up crying every morning and I’ll be honest. If I had to bottle, I probably wouldn’t be here now. I would have done something drastic.”

While talking to Michael Bisping, Paddy shared that a very close friend of his, Ricky, passed away on Friday just before the weigh-ins. According to Pimblett, Ricky died by suicide. He was visibly shaken as he was making his way to the back after the bout.

During the BT Sport interview, the 27-year-old shared more details about when he found out about the news. He revealed that he got the news on Friday morning right after waking up. Although he burst out crying, Paddy still went through with the weight cut and made the walk to the Octagon. It just proves how mentally strong Paddy really is.

Even someone who’s as mentally strong as Paddy went through a very rough period where he was suffering from depression. Hence, he wants all the men to speak up and urged them to seek help instead of taking any drastic steps which will affect many people.

“I’ve been there. I know how hard it is to get through stuff like that and I’m one of the most mentally strong people I know on planet earth. So if I’ve struggled with it, I know a normal person is gonna struggle with it and as I say, that’s why we need to talk more. Men need to talk.”

Paddy’s whole stance on mental health has made him much more human in the eyes of the fans. More often than not, fighters are perceived as larger-than-life characters. But they are not, as a matter of fact, just like everybody, they are human too. By speaking out in public, Paddy just raised a very important issue and brought mental health to the forefront.