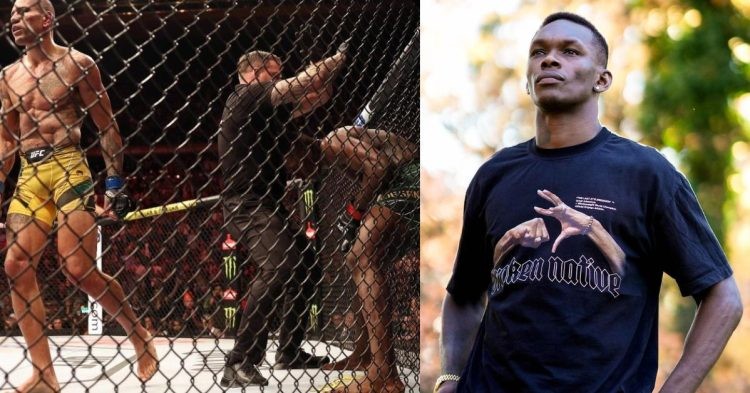 Israel Adesanya reveals he was going to pull out of Alex Pereira fight, credits - Instagram

Israel Adesanya in a recent episode of Flagrant podcast with Comedian Andrew Schulz revealed that he was close to pulling out of his fight against Alex Pereira in UFC 281. In the end, Israel Adesanya ended up losing to Alex Pereira by TKO and lost his middleweight title.

MMA fans were eager to see The Last Stylebender get his vengeance against the Brazilian in one of the most anticipated fights of the year. Unfortunately, Adesanya lost to Pereira in the fifth round via TKO.

Adesanya shared some “breaking news” in his recent interview with FLAGRANT. Izzy said he almost pulled out of the fight with Pereira because of his leg injury.

He stated that “Breaking news… I was gonna pull out of this fight early on…This time with the last fight with Cannonier, I hurt my PCL. And that’s the thing that keeps your knee from going backward. Early in camp, it had some problems. So, there was a bit…how many weeks, maybe like three weeks I just did boxing… Eventually, towards the end of camp or towards like halfway, I was taking leg kicks from Carlos checking them.”

The former middleweight champion acknowledged, however, that he refrained from ending the contest. He didn’t want his supporters to believe that he was “fearful” of competing against Pereira. He stated that “So, I was gonna pull out early but I was like, “Nah, I wanna get this done.” Because I am a prideful man…I’ll be da**ed if people say I am a f**king, I’m scared of this guy because I’m not. I knew I wanted to fight.”

Adesanya in the post-fight press conference said that he lost because his legs were compromised during the fight. Izzy said how his performance changed as the fight went on due to a perineal nerve injury he sustained from the fight. Adesanya who is always good with his feet was seen limping after the first round

Izzy stated that “It might have been the second kick he landed… I just felt the nerve shoot up and I was like that’s weird, but then throughout the fight, it started to – you know, when you’re walking and you have heavy feet and you drag it and it drags on the floor? It felt like that every 10-15 seconds. I’ll be moving and my toes just catch the ground.”

Despite his loss in UFC 281 Adesanya has proven himself as the favorite in a rematch with Pereira. If the Last Stylebender doesn’t take an extended layoff, Adesanya is probably going to be Pereira’s first title defense.