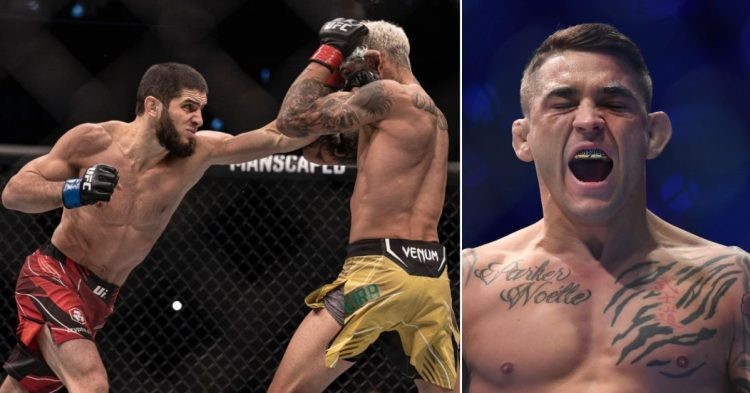 While it wasn’t really shocking to see Makhahcev get his hands raised against Oliveira. However, it was the way that Makhachev dominated the Brazilian fighter both on the feet and on the ground that surprised a lot of fans.

Speaking to the media days ahead of UFC 281, Dustin Poirier shared his thoughts on Makhachev’s victory.

“I was surprised. I didn’t have a dog in the fight but I thought Charles was gonna get it done. But congrats to Islam, he is the world champ!” Poirier said.

When asked about what he felt about Makhahcev as Champion, Poirier had nothing but praise for the Dagestani fighter who has now proved that he belongs at the absolute top of the division. “Tough guy, on a streak, looks like he has put everything together, doing everything right.” He added.

Islam Makhachev has truly impressed the UFC fans with his dominant victory over Charles Oliveira and one waits to see what lies ahead for the new UFC Lightweight Champion.

UFC President Dana White has confirmed in the lead-up to UFC 280 that Alexander Volkanovski will fight for the UFC Lightweight title next. Considering Makhachev reigns as the champion right now, it looks like we might see the Dagestani fighter take on the UFC’s Featherweight Champion next.

Moreoever, with Makhachev calling out Volkanovski during his post-fight Octagon interview, it looks like a done deal between both fighters. Dustin Poirier wasn’t too sure about how the fight goes and had a rather bleak response when asked to give his prediction.

I’m not sure what UFC wants, February Australia or March Vegas, I honestly don’t care about location and opponent, I never choose opponents. Just send a contract and stop playing games

After Makhachev’s recent tweet, there’s also a huge possibility that we could see Islam fight the winner of Dustin Poirier vs Michael Chandler. While Chandler has already set his eyes on Makhachev should he emerge victorious this weekend, Poirier is not too sure whether he gets a title shot with a victory.

Poirier will step inside the Octagon this weekend after coming off a third-round submission loss back at UFC 269. This is the longest that Poirier has been without a fight, stepping inside the cage after a long 11 months.