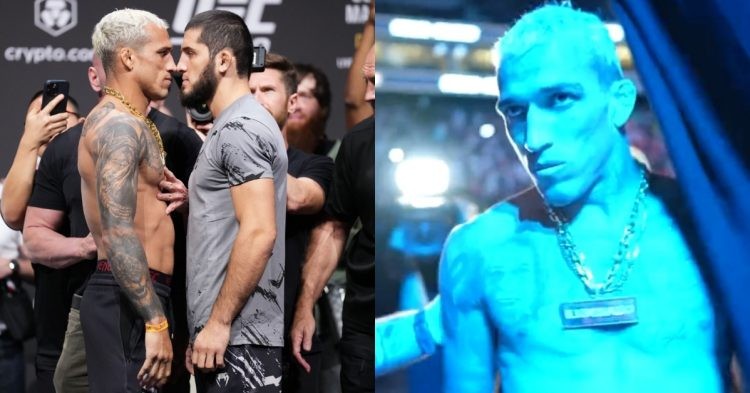 UFC 280 main event fight is official as both headliners are on weight and set to step inside the Octagon. After the official weigh-ins, fighters just faced off in the ceremonial weigh-ins. While all the competitors were fired up for their respective fights, the face-off between Charles Oliveira and Islam Makhachev was especially intense.

Although there have not been any physical altercations between the two, their camps have exchanged a lot of heated words. While Islam’s cousin and former UFC lightweight champ Khabib Nurmagomedov questioned Oliveira’s grappling credentials, Oliveira’s head coach Diego Lima wants Khabib to come out of retirement, if Do Bronx beats Makhachev.

No backing down 💢@CharlesDoBronxs takes on @MakhachevMMA for the undisputed LW championship TOMORROW!

So it is safe to say that tensions are high between the two camps. At the beginning of the fight week, Islam and Charles ran into each other in a hallway and neither exchanged many words. But they finally shared the same stage at the UFC 280 press conference and had an argument on the mic.

Although they faced off after the press conference, their face-off in the ceremonial weigh-ins, was one of the most intense in recent memory. As Charles Oliveira was making his way to the back, he was heard saying, “I will kill this guy.”

Ever since the fight was made official, there was a lot of intrigue to witness the contest. Fans and experts alike wanted the bout to happen and it is finally here. Although he is the betting underdog heading into the fight, Charles Oliveira wants to shock the world this Saturday and beat Islam Makhachev. But how does he plan to do so? According to the 32-year-old, it will be via knockout.

The prediction is in: @CharlesDoBronxs is calling for the first round KO 💥

“In truth, it’s my history, it’s my story. I mean I have all the respect in the world for this guy. But, I’m a sharpshooter, I’m gonna keep pressing forward, I’m gonna knock him out in the first round.”

The fight will mark the first time that Islam Makhachev has found himself in a championship fight. On the other hand, Oliveira has fought on 3 previous occasions when the belt was on the line. Hence, the experience will certainly be on his side. Fans are well aware of his BJJ credentials, as he is the most successful submission artist in the UFC with 16 submission wins.

He also has incredible power, a claim which was supported by his last opponent Justin Gaethje. The only factor that goes against him, is wrestling. Makhachev will be the much superior wrestler. Can Oliveira negate that and enforce his magnificent Brazilian Jiu-Jitsu skills on the Degastani wrestler? Fans will find out at UFC 280 which goes down on October 22nd.