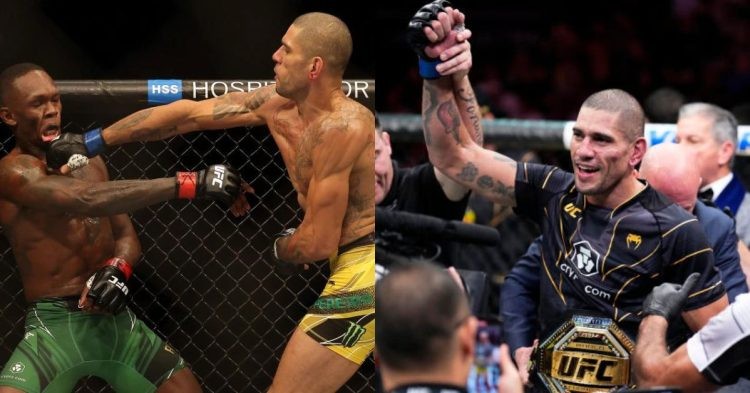 Yet again, Alex Pereira proves that he is the kryptonite against The Last Stylebender. He stopped Israel Adesanya by TKO in the 5th round Pereira and became the UFC middleweight champion. Alex Pereira fought his former rival in Glory kickboxing at the main event of UFC 281.

Adesanya won the majority of the first four rounds through better striking, takedowns, and ground control over Pereira. Although, the former kickboxer appeared worn out by the conclusion of the fourth round. The Brazilian, however, entered the fifth round with an altered body language.

Pereira made the game-winning decision to chase after Adesanya with five seconds left in a kill-or-be-kill situation. Pereira delivered a left hook to Adesanya as he backed up against the cage, causing the champion to visibly stumble. Pereira started throwing heavy shots and combos after that, and Adesanya didn’t really exhibit any signs of retaliation.

It is also rumored that before the fifth round Alex Pereira declared to himself, “Eu vou te matar” which translates to I will kill you in English.

The middleweight title bout between Israel Adesanya and Alex Pereira was one of the most anticipated fights of the year. Adesanya has twice lost to Pereira in kickboxing, but this was their first clash in UFC octagon. In their kickboxing rematch in 2017 Pereira had beaten Adesanya by a brutal knockout, in which the latter required an oxygen mask to regain consciousness.

UFC president Dana White in the post-fight press conference talked about Alex Pereira’s corner at the start of the fifth round. He stated that “I don’t know if you guys have headphones over on your side but the corner, in Pereira corner that round it was like straight out of a movie”.

It’s a fact that coaches play a major role in bringing out the spirits of the fighter and guiding them the right way. At the conclusion of the fourth round, Pereira appeared to be falling behind in the battle, so his coach instructed him to execute combinations.

Additionally, Pereira’s coach urged him to maintain his caution. He was heard stating, “He is feeling when you are hitting. You only have one round, active with your defense and combos, two, three strikes. Just one-twos, alright, breathe. Right now you are going to be a world champion. This round is yours. Go for it.”

Alex Pereira and Israel Adesanya are already aiming for a title rematch after UFC 281. However, it’s not certain if Adesanya wants to come back into the octagon in short time after a TKO loss.