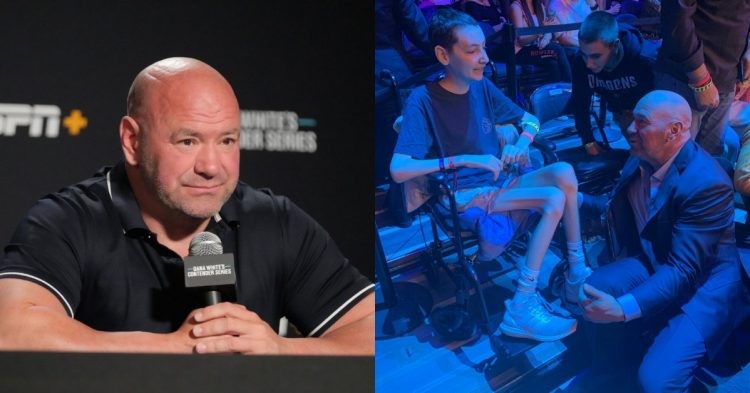 UFC President Dana White shares a heartbreaking piece of news with the fans. In the MMA community, Dana has a reputation for being a very tough and ruthless businessman. But, fans saw a very different side of him as he paid tribute to a young child Michael who passed away recently and expressed his sorrow.

Dana White met Michael during UFC 279 PPV event. Apparently, Michael was such a massive UFC fan that his family even set up a Go Fund Me page to make his dream of attending a UFC event come true. Once, Dana got a wind of that, he brought Michael to Las Vegas for the event and the child had a good time. But Dana himself fell in love with Michael’s enthusiasm and invited him to UFC 281 as well.

The 53-year-old provided Michael with the best seat possible and gave him the opportunity to sit near boxing legend and MMA fan Mike Tyson. He had a great experience meeting his heroes and taking pictures with them. However, he passed away shortly after turning 16. White was left heartbroken and dedicated a beautiful message to Michael.

“Amazing, incredible, beautiful little Michael passed away today and I’m fuckin devastated. He held on long enough to make the event and I just want to thank EVERYONE involved with Saturday Night that made his weekend special. My heart goes out to Michael’s friends and family and I want to thank you Heather and Brian for introducing me to him. I will never forget him.”

Fans react to the incredible gesture from Dana White

Dana White does not often speak about the charity work he does. UFC fighter Joe Pyfer recently revealed that White impacted his life in a major way. Pyfer was apparently on the verge of being homeless. However, Dana stepped in and gave him a place to stay for a full year and also gave him money to live his life. But that is not the only occasion when White did something out of his goodness.

At UFC 272, UFC featherweight fighter Bryce Mitchell revealed that he would donate half of his fight purse to a charity in Arkansas. But, Dana later asked Mitchell to keep the money and donated the $45,000 himself to the charity. Among his other big donation, he donated $100,00 to Dustin Poirier‘s charity, The Good Fight Foundation. White also donated an amount of $1 million to victims of tragic shootings in Las Vegas in 2017.

Dana’s latest tribute to Michael is also earning him a lot of praise. While some were happy that the child was able to attend two major UFC PPVs, others lauded White for his incredible gesture. Although fans do not see eye to eye with Dana on a lot of issues, they praised him for his personal acts of kindness.

Here are some fan reactions to the matter

God bless you Dana…as a mom w/special needs son – it’s these small gestures to make our kids feel ‘normal’ and part of the team – even if just for a few minutes/hours is the ability to FORGET the disability/illness and just be, love, live in the moment – THANK YOU!!!

Great thread, stories like this warm the heart and makes the world a little better. 👏

Damn, his family will always have this one helluva last weekend memory with him and that’s priceless.

I’m glad he was able to experience all that. RIP Michael.

So awesome! You truly are one of a kind Dana. Thank you for being who you are!

What are your thoughts on Dana White’s tribute to Michael? Let us know in the comments down below.