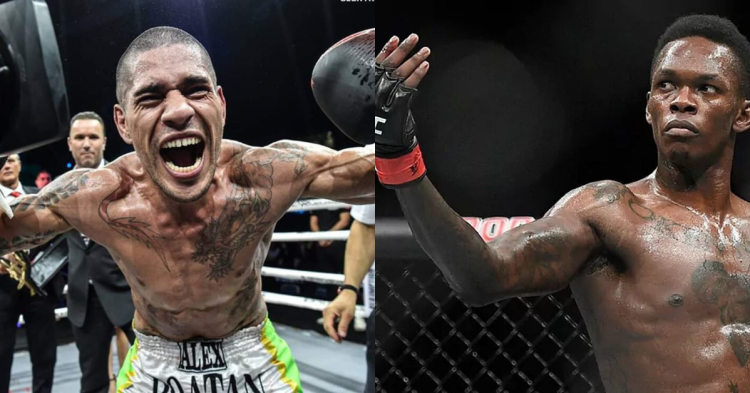 UFC Middleweight champion Israel ‘Stylebender’ Adesanya has recently spoken about his grappling game ahead of his clash against the Brazilian Kickboxing Champion and UFC contender Alex ‘Poatan’ Pereira. Both the fighters hail from a kickboxing background and have a high striking pedigree. Adesanya has 80 fights in the kickboxing ring, and has only lost 5 times. Two out of those five losses come from Alex Pereira who has a record of 33 wins and 7 losses.

Both the fighters have never been known to be grapplers, and have always relied solely on their striking and defensive wrestling. Adesanya, despite being a striker, has been taken down relatively lesser than any other striker.

The last time he suffered a loss in MMA, it came because his opponent Jan Blachowicz overpowered him at light heavyweight. Adesanya got out-grappled for two rounds by the Pole.

Despite his unsuccessful run-in with wrestling, Adesanya seems pretty confident in his grappling against Alex Pereira. Adesanya recently spoke out in theUFC 281 press conference on how he plans on taking down the Brazilian and even punching him from the top. Adesanya quoted:

“For me, I’ll take him down and I’ll punch him in the face and he’ll be on the ground.” In another interview on UFC Embedded, Adesanya stated, “If he shoots (a takedown), I’ll choke him out”

The Stylebender‘s grappling has not been on display often in his career. But, there have been exceptions. He was seen putting his former opponent Kelvin Gastelum in a triangle choke from the bottom in the final round. That set a precedent that Adesanya could fight off of his back.

Alex Pereira also seems pretty confident in his ground game, stating how he is not just a striker anymore. He said that he understands that MMA has a lot of aspects to cover. He assured that he has successfully covered all the aspects of MMA, including the grappling.

Considering he’s been training with the former UFC light-heavyweight Champ and elite grappler Glover Texeira, his words hold a lot of weight behind them. Alex Pereira does not want his grappling to be underestimated, and is ready to prove the doubters wrong this weekend.  Pereira stated:

“I’m prepared, it’s MMA, a lot of people underestimate what I can do on the ground. I’m gonna prove to you I’m a complete fighter”