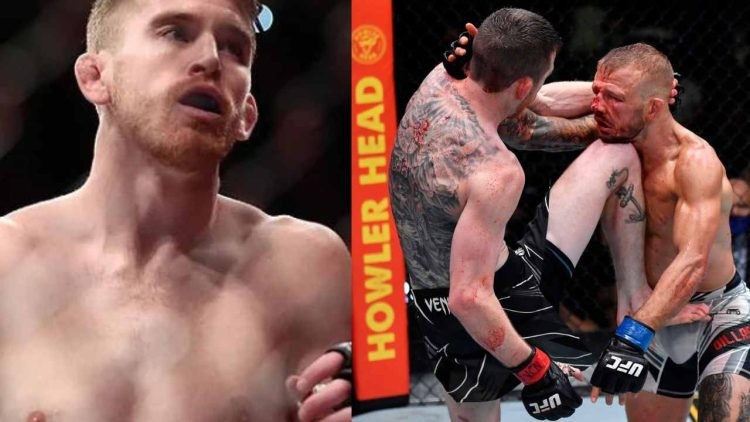 Cory Sandhagen is one of the best fighters in the UFC’s bantamweight division. Currently 14-4, the Sandman has shown his skill and grit against some of the best in the division. Unfortunately, there is one fight in particular that Cory will be regretting not being able to win.

Cory took on TJ Dillashaw at UFC Fight Night on 25 July 2021 at the UFC APEX, Las Vegas, Nevada. On that night, TJ Dillashaw was awarded the split decision victory after a 5 round of war. However, the decision was a controversial one as the entire MMA Community, be it fans, media and even one judge felt Sandhagen was the clear winner. In fact, other than judges Sal D’Amato and Junichiro Kamijo, everyone on the planet felt Cory won the contest 48-47.

“The way I feel about the fight overall is that I won the fight more by my standard,” said Sandhagen in an interview. “But as a third person party and kind of the aesthetic of the fight, I can see how a judge would give T.J. the nod because of aggression and him moving forward.” Fans and Media labeled the decision as a complete robbery against Sandhagen.

Let’s take a look at the stats from the fight.

Cory Sandhagen’s Thoughts On The Fight

For the most part, Cory felt as though he had done enough to win the fight, as did we all. Even the stats share a similar story but the glaring details lie in the control. TJ was able to control Sandhagen for a total of 8 minutes and 22 seconds out of the 25-minute fight.

At the end of the fight, Cory looked practically unscathed whilst Dillashaw looked as though he needed to be taken to a hospital immediately. “So it’s really frustrating for me to feel like T.J. earned that win because he was being really aggressive but nothing that he was doing was working, which is frustrating,” added Sandhagen.

Despite the result, Cory won the opportunity to fight for the title against Petr Yan at UFC 267. Sandhagen was the short-notice replacement for Aljamain Sterling, who was ruled out due to injury. As such, Cory will now be working hard to make his way back to the top and earn another title shot. First, he must dispose of up-and-coming star Song Yadong at UFC Fight Night on 18 September 2022 at the UFC APEX, Las Vegas, Nevada.

“If You Are a Muslim, You Should Have Good People Around You”- Khabib Nurmagomedov Condemns Khamzat Chimaev for Missing Weight by 7.5 Lbs, Blames Chimaev’s Coach and Teammates