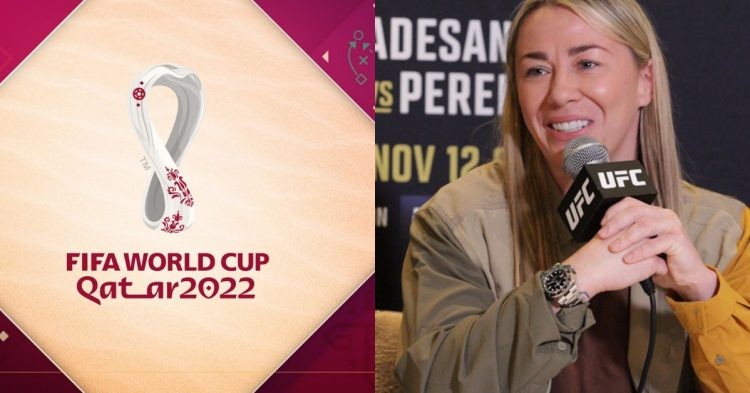 Soccer World Cup 2022 will kick off on November 20th with a match between the host country Qatar and Ecuador. The entire world is buzzing for the mega-event as 32 nations are set to fight for the highest honor in the sport. However, one person who is not excited about the event is UFC women’s flyweight fighter, Molly McCann.

Molly McCann will fight Erin Blanchfield in the prelims of UFC 281. The 32-year-old is looking to move up the ranks and beating Erin will help her cause. The British fighter recently appeared in front of the press ahead of this Saturday’s PPV. During that, she was asked about the upcoming FIFA World Cup. Molly’s country England is one of the contenders to win the whole thing.

However, she not looking forward to the event at all! Meatball Molly is a big soccer fan and supports Everton in the English Premier League. She often wears the team jersey to show her love for the club. But it does not look like she is donning the England jersey for the 2022 World Cup, as she is not thrilled about the location of this edition of the competition.

“I’m not bothered about that, I’m not feeling the Qatar vibes and all the human rights that haven’t gone down there. I won’t even be watching it.” (h/t via The Mirror)

Why does Molly McCann want to boycott Qatar World Cup 2022?

There are a lot of controversies surrounding the upcoming Qatar World Cup 2022. A majority of the fan base objected to the decision of holding the event in the middle-eastern country. Apparently, there were a lot of human rights violations in the country in preparation for the event. Qatar built 7 new stadiums, 100 new hotels, an airport, and a new metro system among other things.

According to a report from The Guardian, approximately 6,500 people perished while working in the extreme conditions of the country. It raised a big question about human rights violations ahead of the World Cup. Even Liverpool FC manager Jürgen Klopp blasted the media members for not raising enough awareness on the matter.

Recently, there were reports of Qatari authorities abusing a member of the LGBTQ+ community in Doha. It sparked a massive outrage online. Fans slammed FIFA for holding the competition in the country. It has to be mentioned that there were a lot of rumors of corruption when FIFA announced Qatar as the host of the tournament.

Molly McCann herself is a proud member of the LGBTQ+ community. She previously elaborated on her struggles when she was coming out. Molly also wrote a book to encourage the youth to make their own choices about their sexual orientation. So it is no surprise that Molly is not in favor of watching the World Cup in a country where her rights are not valued.

Will Qatar welcome members of the LGBTQ+ community for the World Cup 2022?

This edition of the soccer world cup will host 32 countries. However, the recent news of the LGBTQ+ community getting attacked in Qatar is extremely worrisome for fans who will travel to the country from all over the world. So fans are wondering if LGBTQ+ members are allowed in the country or not.

However, Hassan Al Thawadi, the Secretary General of the Supreme Committee of Delivery & Legacy, has reassured the fans. But he implied that fans will have to behave themselves to avoid getting in trouble with the authorities. He revealed the country’s stance during an interview with former England international Gary Neville.

“These are vital questions, yes, plain and simple, everyone is welcome in Qatar. But in the nature of being a good guest is always to understand the country or home that you’re visiting. Appreciating the nuances and differences in opinions and values, and find the commonality, treat each other with respect.”

What is your take on the issue? Let us know in the comments down below!