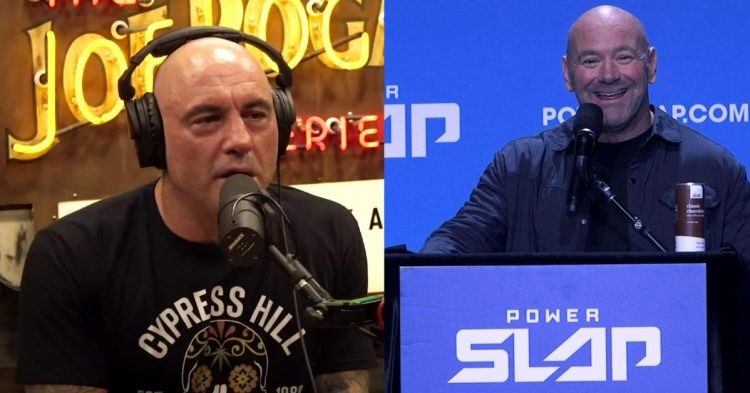 Joe Rogan is arguably the most liked UFC analyst and a lifelong martial artist. But one thing he is not a fan of is – Dana White’s latest combat sports venture, Power Slap league. White recently announced in a press conference that he will be starting a slap-fighting competition soon.

The television show will debut on TBS early next year. However, Rogan is skeptical about this new fighting league. In a recent podcast in the Joe Rogan Experience, Rogan explained that he is not much of a fan of slap fighting but he will still watch it. He said: “I love Dana, and I would be a hypocrite if I said I wouldn’t watch this because I will watch it – but this is not my cup of tea.”

“What I like is problem-solving. I like puzzles. What I like is (Sean O’Malley) and (Petr) Yan. This f*cking Russian assassin is rushing the gates and you’re kicking and moving away and jab at him. That’s what I like. I love technique.”

Rogan loves real fighting where there is a technique like MMA, but as he is friends with White, he will tune in to Power Slap League. Slap fighting is very popular on social media and gains millions of views and usually, it is more prevalent in Europe and Russia.

Looking at the popularity of the slap-fighting videos, White believes that his Power League can also pull a huge number of views. According to White, it is more of a social media product but he is willing to test it on television.

Ahead of the UFC 281 ceremonial weigh-in, Dana White announced “the biggest slap competition of all time” and it has been licensed by the Nevada State Athletic Commission. There will be rules and weight classes in the Power Slap League like we see in an MMA fight.

According to sources, the slap fighting match will have three or five rounds and there will be commissioned judges. The 10-point system will be used which is popular in MMA and boxing (10-9, 10-8).

The gloves stay off starting in early 2023 🖐️ pic.twitter.com/Njzpkbtll5

Each competitor will alternately slap each other; unless one fighter is determined a winner or one competitor is deemed unable to continue. Before a fight, a coin toss will determine which fighter goes first. As per the rules, there will be fouls which include flinching, blocking, or delaying the match.

Interestingly, there will be a gauging count set for each fighter before they strike. It is similar to a golfer gauging the distance to a golf ball before striking. There will be a ‘striker’ and a ‘defender’.

Power Slap – coming to a TV near you in early 2023! 🖐️ pic.twitter.com/jRIkNZeBdz