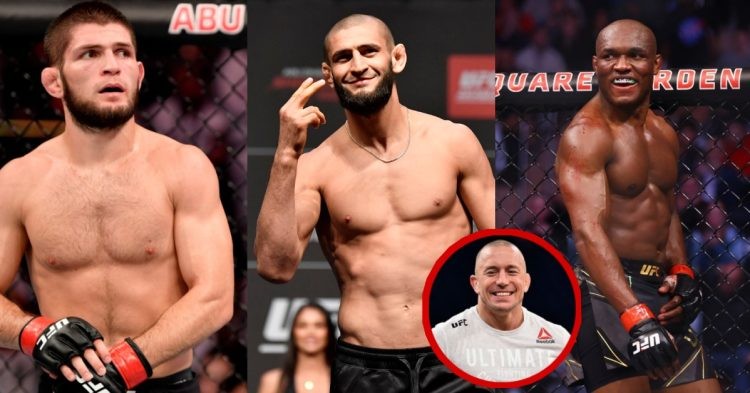 GSP lists the fighters he wants to face. (Images via Twitter)

Former UFC Welterweight Champion Georges St-Pierre was in attendance for UFC Vegas 58. Although he has not been in action since beating Michael Bisping at UFC 217 on November 4th, 2071, the fans are still hopeful to see him in action someday. But he has been adamant for a while that he will never fight again. GSP seemed to echo that sentiment in a recent interview as well.

GSP seemed to completely rule out a return to the Octagon. St-Pierre emphasised that he does not miss being in the Octagon or the training camps. However, he did list 3 fighters that he would have liked to face if he was still an active fighter. He named lightweight GOAT Khabib Nurmagomedov, welterweight champ Kamaru Usman and rising contender Khamzat Chimaev.

“Well, if I would have to come back and fight today, the three current fighters that I would have choose to fight and I won’t because I don’t wanna come back. But If I would have come back, I would want to be the best. So I would hunt the best guys.”

“Maybe Usman, Chimaev… compete against Khabib if he would still be there. But unfortunately for me and the fans and everybody, that it’s not gonna happen. Cause I’m done and I don’t miss it at all.”

Kamaru Usman previously called out GSP for a fight to determine who is the greatest 170lbs fighter of all time. But the 41-year-old turned down the opportunity. However, Khabib was the closest to bringing GSP out of retirement, but the fight fell through eventually.

Georges St-Pierre vs Kamaru Usman: Who is the greatest welterweight of all time?

Both George St-Pierre and Kamaru Usman are amazing fighters in their own rights. Although both of them have quite similar fight styles, they belong to completely different eras. GSP is a two-time UFC welterweight champion. His first title victory came against Matt Hughes at UFC 65. Although he lost the belt to Matt Serra in his very next fight, GSP managed to win it back a few months later at UFC 79.

Since losing to Serra, he went on a record-breaking win streak of 12 fights in the welterweight division and 9 of them were title defences. In total, Georges St-Pierre holds a record of 20-2 in the company. Not only that, but he also won the middleweight title at the aforementioned UFC 217.

On the other hand, the current champion Kamaru Usman has been undefeated in the UFC so far. He has a record of 15-0 in the welterweight division. Following his title win against Tyron Woodley at UFC 235, The Nigerian Nightmare has had 5 title defences. But four of them involved the same two opponents, Colby Covington and Jorge Masvidal.

Even in terms of quality, GSP has a much better resume than Usman. Georges has beaten the likes of a prime Nick Diaz, Johny Hendricks, BJ Penn, Carlos Condit and the list goes on and on.

Usman is slowly moving up the ranks in the conversation of the greatest welterweight of all time. But in order to match or surpass GSP, Usman will need to accomplish a lot more than what he currently has.

Do you think Georges St-Pierre is the greatest welterweight fighter that the UFC has ever seen? If not, then who is the GOAT at 170lbs? Let us know your thoughts in the comments down below.